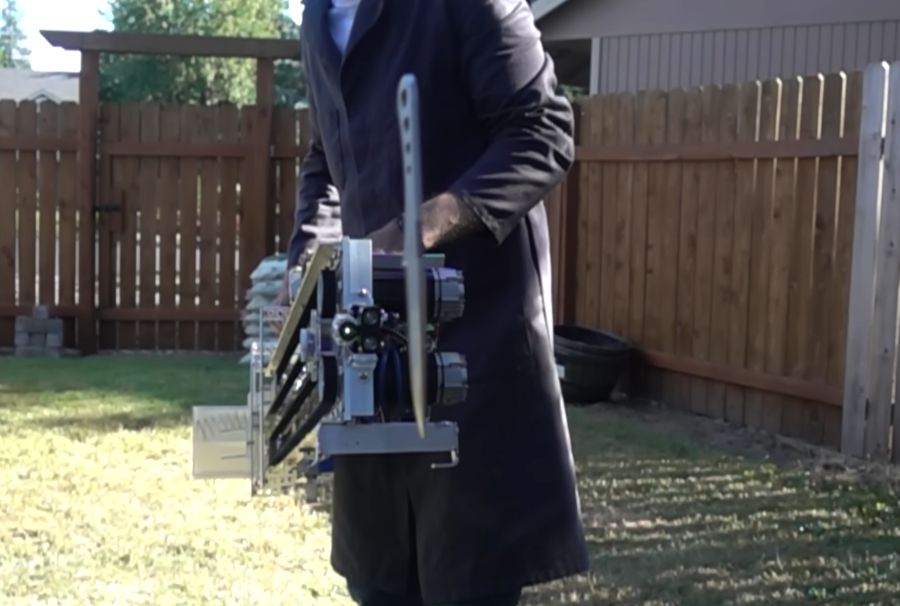 Engineer, inventor, and educator Quint BUILDs (a.k.a. Quint) has used his—and his son’s—extraordinary reservoir of talent to build what should’ve been built many, many moons ago: a “knife-throwing” machine that uses LiDAR (a.k.a. “light detection and ranging” or “3-D laser scanning”) to chuck blades with deadly accuracy. In the video immediately below Quint and co. explain how (and why) they built their knife-throwing machine. As well as showcase its ability to perfectly nail ten out of ten shots in a row—from different ranges to boot.

Quint, an engineer with more than 20 years of experience—and about 500,000 followers on YouTube—recently posted his knife-throwing machine video, explaining at its outset that his brilliant (and highly dangerous) toy operates by ranging a given target with LiDAR, then, in turn, adjusting an aiming laser to calibrate the perfect knife throw. Which is, as it may seem, quite an engineering sequence to pull off.

Over the course of the video Quint shows how he and his son built the automated knife thrower; iterating its design, sampling with materials, and auto-chucking knives day and night. Literally.

In essence, Quint’s knife-throwing machine works by using servo motors—or rotary actuators capable of quick, energetic movement, making them ideal for robots—to rotate dual belts that rocket a 3D-printed carriage between them back and forth at high speed. The carriage itself, which never leaves the machine, holds a spinning magnet that’s spun with electricity via a pair of copper bars that double as guides. The knife is then stuck onto the spinning magnet, and fired at its target.

To aim and fire the knife-thrower Quint’s son has programmed the input from a LiDAR sensor (that determines the distance between itself and a targeted object by measuring the time it takes for a laser to reflect back from said object) to control a motorized aiming laser. Once the aiming laser has repositioned itself and “locked onto target,” the shot is a guaranteed hit as the laser picks a spot that compensates for the trajectory of the knife. (Coming up with the math for the motor timing needed to make sure the knife would perfectly execute 1.25 turns between being fired and hitting its target was also, understandably, an enormous challenge.)

As for the final build? It works flawlessly. As in it’s able to fire off one knife after another—from a magazine!—and hit its target square on and with enough force to leave the tip of any given hunk of ammo firmly embedded. At 37 pounds, it’s not too heavy either. Although for a consumer product, there’s still a lot of work to be done. And it should be too, because people would probably pay a few grand for one of these. And who needs all their limbs anyway?