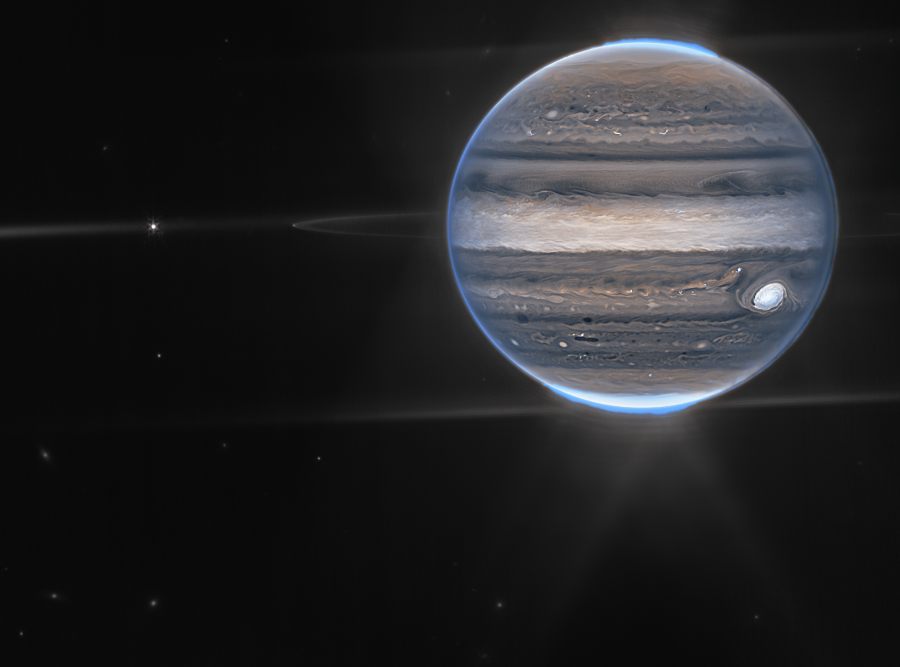 New images from NASA’s James Webb Telescope—processed with the help of a citizen scientist, who translated raw data into colorful images—shows the planet, and its rings and moons, in an ethereal light.

In another cool view of our solar system brought to us by the James Webb Space Telescope—an infrared observatory orbiting the Sun about 1 million miles from Earth, launched in December of last year—we see Jupiter bathed in a bluish glow so gentle it’s calming. Making the images cooler—along with its already cool hues—is the fact that a citizen scientist helped to process the images.

NASA—which, in league with the European Space Agency (ESA) and the Canadian Space Agency is responsible for JWST—reported on the new Jupiter images in a post on August 22, 2022. The space agency noted in its post that the new images come from JWST’s Near-Infrared Camera (or NIRCam), which has three specialized infrared filters showcasing details of Jupiter.

“We hadn’t really expected [the images] to be this good, to be honest,” planetary astronomer and professor emerita of the University of California, Berkeley Imke de Pater said in NASA’s post. De Pater, who, along with professor Theirry Fouchet at the Paris Observatory, led the observations of Jupiter that allowed for these images, added that “It’s really remarkable that we can see details on Jupiter together with its rings, tiny satellites, and even galaxies in one image.”

NASA notes that, because infrared light is invisible to the human eye, the light bouncing off Jupiter, its moons—Amalthea and Adrastea—and its dust rings, has been “mapped onto the visible spectrum.” The space agency notes that the scientists who translated the images from infrared data to visible images made the longest wavelengths captured by JWST appear redder and the shortest wavelengths bluer.

In the image immediately above we see a standalone Jupiter made of a composite of several images. Note the planet’s auroras—or pulsating X-ray light sources likely linked to closed magnetic fields that are generated inside Jupiter—extend out to high altitudes above both of the planet’s poles. The scientists who processed the images mapped the auroras’ infrared light, as well as the infrared light from lower clouds and upper hazes, to redder colors.

Two other filters were also applied in the standalone Jupiter image, including one mapped to yellows and greens, showing hazes swirling around the northern and southern poles, and one mapped to blues, showcasing light that is reflected from the planet’s deeper “main cloud.” Jupiter’s famous Great Red Spot, a storm so big it could swallow Earth, appears white in these images as it is reflecting a lot of sunlight.

“This one image sums up the science of our Jupiter system program, which studies the dynamics and chemistry of Jupiter itself, its rings, and its satellite system,” Fouchet said in NASA’s press release. Judy Schmidt, the Modesto, California-based citizen scientist who helped to process the images, added in the post that her guiding philosophy in translating JWST (and Hubble telescope) data is “to get it to look natural, even if it’s not anything close to what your eye can see.”