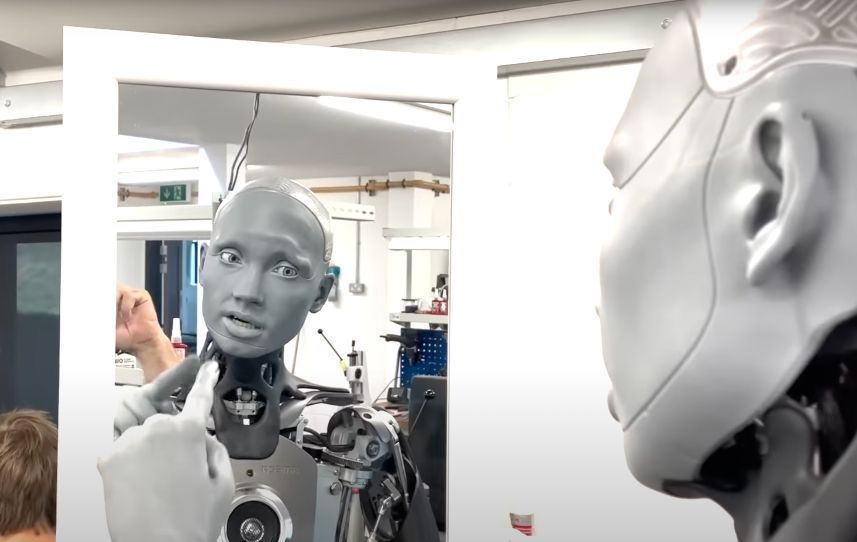 UK-based robot manufacturer Engineered Arts has released a new video of its humanoid robot Ameca “looking at itself in the mirror.” (But not really.)

If you’ve been living under a rock—or off grid, in the mountains, which is probably a great idea at this point TBH—you may have not heard about the humanoid robot Ameca. The frighteningly humanlike robot has taken the internet by storm, however, because of videos like the one immediately below. In the new video we see the humanoid bot “look at itself in the mirror” as if it were actually studying itself. And while the bot certainly is not doing that, the demo’s still creepy enough to make a cabin in the woods sound even more appealing.

Engineered Arts, the entertainment-robot manufacturer responsible for Ameca, recently posted the above video to its YouTube channel noting the company’s “been working on teaching [the robot] a wider range of facial expressions.” Apparently the Arts team has added 12 new actuators—or parts of a device or machine that help it to achieve physical movements—and it’s now figuring out how to control a new range of “expressive capabilities.”

In the video we watch as Ameca makes various facial expressions while looking at a mirror. Expressions including (evidently) surprise, suspicion, confusion, wonder, ecstasy, shock, anger, and fear. Ameca even raises its humanlike hand and finger to the mirror in front of it as if to denote self-discovery for the very first time.

According to Engineered Arts Ameca is a “development tool” and “cutting-edge integration of the latest technology that’s built to last.” The UK-based company adds the humanoid bot “multiplies” the power of AI with an artificial body; aiming to deliver the “most advanced lifelike humanoid you can use to develop and show off your greatest machine learning interactions.” In the video immediately below Ameca shows off the range of fluid movements and emotive expressions that first helped it go viral online.

For those who think Ameca is even approximately “sentient,” however—looking at you, Google AI ethicists—Engineered Arts clarifies on its website that its robots don’t possess anything close to general artificial intelligence (or AGI). Indeed, the team notes on its site that “Pure AI – the kind depicted in films like Her, Bladerunner and 2001: A Space Odyssey – sadly does not exist yet.”

The entertainment-robot manufacturer also says that “If you’ve spoken to one of our robots, you might well have enjoyed a great conversation. But you were actually probably speaking to a human through our innovative telepresence software, TinMan.” With its TinMan software, Engineered Arts says “you can [control] the robot from anywhere in the world.“ The company adds that “Using inbuilt cameras and microphones, you can control its gaze, enter a natural conversation, and trigger content on the fly” and that “Automated features like face tracking keep interaction compelling and believable.” Which sounds innovative, and also like another reason to start looking at real estate listings for homes on remote islands.