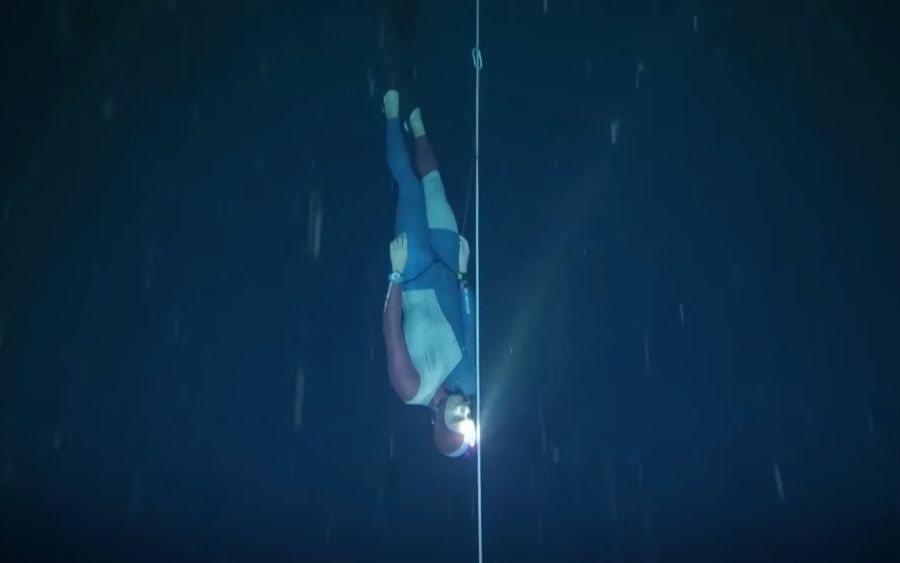 French freediver Arnaud Jerald has set a new “bi-fin“ freediving world record of nearly 400 feet and the video of the feat will take your breath away.

On August 9 of this year French freediver Arnaud Jerald executed the deepest freedive ever using bi fins—or a pair of fins, rather than a single mermaid-tail-like “monofin”—descending to a depth of 120 meters (or 393.7 feet). The dive marked Jerald’s seventh world record dive in his young career, which may ultimately see him become the world’s new “deepest man.”

Jerald’s record-breaking dive is shown in the video above, and each moment is pure suspense. (Even if you know he does make it out alright in the end.) Jerald’s dive took place at the yearly Vertical Blue freedive competition, which is held at Dean’s Blue Hole in the Bahamas.

The French freediver, who’s only 26 years old, was under water for a total of 3 minutes and 34 seconds including both his descent and ascent. As is shown in the video, Jerald performed his dive by holding onto a guideline ultimately anchored to the bottom of the Blue Hole. Jerald, who, of course, performed the whole dive on a single breath, looks absolutely serene on the way down. And only a little bit thrilled to get back to the surface on his way up.

“I feel very good [about the dive]” Jerald told the press after his record-breaking feat. “It’s true that it’s impressive, I can’t believe it yet,” Jerald added, noting that “It’s a depth that we would never have imagined reaching a few years ago in this discipline.”

Jerald, who was born in Marseille in 1996 and introduced to freediving at a young age by his father, would have to perform a different type of freedive if he ever wanted to technically be “the deepest man” on the planet. (Assuming he’d want to be, which he may not.) As of right now, that literal title belongs to world champion freediver Herbert Nitsch. Nitsch, an Austrian, performed a “no-limit” freedive in 2018—using a weight to push him down and a buoyancy device to bring him back up—that saw him dive down to 702 feet below the ocean’s surface. Which, one can only imagine, requires fighting through enormous amounts of literal, and figurative, pressure.