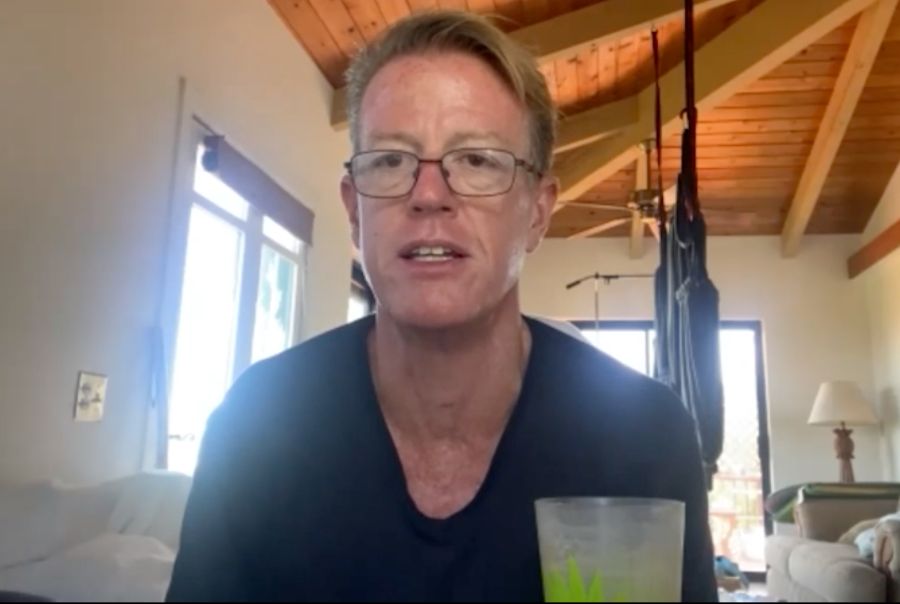 In a new interview with Dr. Joseph Mercola, former BlackRock fund manager Edward Dowd discusses America’s possible neo-feudalist future and how he’s more convinced than ever that “COVID may have been planned.”

Former BlackRock fund manager Edward Dowd—now famous for nailing how the COVID-19 narrative would unfold back in May of 2020—continues to fill in his “analyst’s mosaic” of what’s really happening in world politics and finance in a new interview with board-certified osteopathic physician Dr. Joseph Mercola. As in previous interviews, Dowd makes it clear financial collapse is imminent, and that the COVID-19 “vaccines” from Moderna, Pfizer, et al. are responsible for an enormous amount of carnage. New in this interview, however, is Dowd’s claim that, as time goes on, he’s more and more convinced “COVID-19 may have been planned.”

Dowd touches on many topics throughout the 74-minute-long interview (immediately above), beginning with a description of his background, as well as an insight into how his former employer functions as an entity. He notes that BlackRock—an asset management firm with a market cap of approximately $1 trillion—wields a “soft influence” over the assets (e.g. companies) it manages due to its control over a large number of shareholder votes. “I don’t believe that [BlackRock, Vanguard, et al.] control these corporations, but they have undue influence… .” Dowd says this is largely because of the growth of passive ETFs (or Exchange Traded Funds), which has allowed for senior executives of the ETF firms—including those from BlackRock or other big asset management firms—to maintain leverage over the voting shares.

“Where there’s a concentration of power there’s definitely things that can go awry and aren’t exactly above aboard,” Dowd says of the current situation. “But I have no proof of that. It’s just, when power’s concentrated bad things usually happen.”

Dowd also offers insight into how—at least according to his point of view—the debt-based monetary system in the U.S. has functioned since the establishment of the Federal Reserve in 1913. In essence, Dowd notes the debt-based finance system is “inherently fraudulent,” because, as banks lend out money, they “overheat” certain sectors of industry once “money becomes too easy [to get].” Dowd notes that the so-called “dot-com bubble,” for example, was one such instance of overheating. (Indeed it was preceded by record-low Fed interest rates.) The subprime mortgage real estate bubble that ended in 2008, likewise, was due to the Fed turning on “the money spigot.”

Because the economy collapsed globally at the time, Dowd says governments “started [printing money and] spending like drunken sailors.” For Dowd, this means “the last 12 years has been a ballooning of what [he calls] ‘the central bank government bubble.'” He asks rhetorically: “So who’s going to save that? Who’s going to be the buyer of that when that blows up? No one.”

So the “global economy was definitely rolling over” due to the 2008 fraud, Dowd says, “and then conveniently enough COVID appears.” He adds that “the reason why that’s important is because when COVID appeared it gave emergency powers to all the central banks, the governments… and it gave them another two years to kick the can down the road. And here we are in 2022 and it’s unraveling again. And the reason why COVID was important is the federal reserve was able to… plug the hole in what was beginning to become a liquidity debt crisis. And they printed 65% more money and the money stock went up 65% in 2020 and that was able to paper over” the shock to the economy from total shutdown.

However, the papering over of the problem could only last so long. And “here we are two years later with the inflation caused by the bad policies of the Biden administration, the EU, the money growth” and it’s led to the “real economy” starting to feel the effects of inflation, Dowd says. The former BlackRock fund manager adds that we’re beginning to see the U.S. dollar go up in value because newly created credit after the dotcom bubble went oversees; now, there’s $15 trillion in dollar-denominated debt in foreign countries that needs to be paid back, but, paradoxically, dollars are now scarce there.

“The reason I think we’re imminently going to collapse is because we’ve never seen a commodity inflation cycle with the dollar going up at the same time,” Dowd says. “Usually they’re inversely related, the dollar goes down and the commodity prices go up in commodity cycles. [But] this is the first commodity cycle since we created the petro-dollar where both [have gone] up in tandem.”

Dowd says this problem has been exacerbated because of supply chain shocks (obviously due to COVID lockdowns and their ripple effects). He says “You could make the case that it’s intentional [too]” on behalf of the Biden administration. “Because the policies are so bad that they’re shutting down energy production even before the Ukraine war; Biden’s first executive order on Day 1 of his administration was to shut down the Keystone pipeline.”

“If everything’s going to collapse wouldn’t it be nice to have a control system where travel is restricted–you can blame it on a virus. You create vaccine passports, which then get linked to digital IDs and central bank digital currencies. I think [COVID] was kind of… a convenient excuse… As we roll through time I’m starting to think this was a plan. I don’t have evidence, but… the fact we’re not stopping what’s going on suggests to me… it’s a conspiracy of interests and they don’t want to stop the rollout of these vaccines. And the longer this goes on, the more convinced I become that COVID may have been planned.”

Dowd goes on to speculate that if there is a financial collapse, and stock indices collapse more than 40%, then the Federal Reserve Bank may start buying up stock in companies outright. He notes the Bank of Japan already buys Japanese stocks and if the Fed starts doing that “then we have what’s literally called neo-feudalism.” Apparently “it’s already occurred, but it’ll become even more ridiculous.”

Following his discussion of the economics behind the COVID “pandemic,” Dowd goes on to talk about how the Centers for Disease Control and Prevention (CDC) has tampered with the National Center for Health Statistics (NCHS) database under the guise of a “system upgrade.” Indeed, as US Naval Intelligence and systems engineer Ethical Skeptic has pointed out on Twitter, the NCHS “upgrade” has resulted in more than 9,200 missing deaths, more than 13,000 recategorized deaths, and almost 30,000 “re-homed” deaths.

Reiterating what he said in a recent interview with Steve Bannon, Dowd highlights  a publicly available actuarial report from the Society of Actuaries Research Institute (immediately below) evincing a massive increase in all-cause mortality amongst the age groups spanning 25 through 64 in Q3 of 2021. More specifically, a 78% increase in ages 25-34; a 100% increase in ages 35-44; an 80% increase in ages 45-54; and an increase of 53% in ages 55-64. Perhaps not incidentally, there was also a 31% increase for ages 65-74, and a 19% for ages 75-84.

Dowd refers to this massive increase in all-cause mortality amongst working-age people in the U.S. as a “silent Vietnam war” as it amounts to 61,000 Millennials killed by the COVID-19 injections. And while some may argue these deaths were due to drug overdoses, missed cancer screenings, suicides, or other socio-behavioral factors, he notes that doesn’t make sense for several reasons. One being that the spike in deaths recorded by the Society of Actuaries uses data from Millennials who necessarily have jobs that provide healthcare—meaning they’re young, healthy, and fully employed; i.e. not prone to suicide or overdosing.

Dowd also notes the spike in Millennial deaths exhibits a very fast rate of change (i.e. it spikes upward quickly). He notes this temporal factor also necessarily excludes explanations like suicides and missed drug screenings as it would be nonsensical to say that this cohort of people all suddenly decided to participate in the same destructive behavior at the same exact time.

Dowd notes that what did coincide—perfectly—with the spike in Millennial deaths in Q3 of 2021, however, were sweeping “vaccine” mandates amongst federal and state governments, as well as corporations. Indeed, the Biden administration, for example, issued two executive orders mandating “vaccines” for federal employees and contractors—amounting to 100 million workers, or two-thirds of the U.S. workforce—in September of 2021. In July of 2021, California—the most populous state in the nation—announced a “vaccine” mandate for its state employees and healthcare workers. In the private sector, Houston Methodist in Houston, Texas was the first hospital system to implement a COVID-19 “vaccine” mandate, which took effect in June of 2021.

Making the “vaccines'” enormous dangers even more glaring, Dowd brings up the fact that the Food and Drug Administration (FDA) wanted 75 years to release all of its documentation on Pfizer, and wasn’t going to release the materials to the public in a more timely manner until the administration was sued in court and lost.

The icing on the cake occurs when Dowd also brings up the case of Brook Jackson and Ventavia. Jackson, who was (briefly) a clinical administrator for Pfizer’s “vaccine” trials, has taken on whistleblower status and brought forth allegations that two of Pfizer’s contractors (including Ventavia) manipulated their trial data and also committed other fraudulent acts.

Dowd goes on to note that an analyst with whom he’s been working has discovered a database from the U.S. Bureau of Labor Statistics that provides a monthly employment report, and, critically, consists of data captured via a real-time survey. Amongst the questions on the survey, Dowd notes, is one that asks: “Are you disabled or is someone in your home disabled?” The number of ‘yes’ answers, apparently, was flat—hovering at about 29 million per year—for the five years prior to 2021. After the introduction of the COVID-19 “vaccines” in the American population, however, the number of ‘yes’ answers shot up to 31.6 million. And the number will only grow when he and the analyst get the June data, Dowd adds.

In total, Dowd notes there has been a 10% increase in individuals reporting disabilities to the Bureau of Labor Statistics since the COVID-19 “vaccine” rollout. Dowd adds that each respondent to the survey is providing a self-volunteered answer; he notes the survey’s not tied to a claim or doctor’s note and therefore provides no incentive for respondents to lie about the status of themselves or their families.

There is one positive caveat Dowd notes toward the end of the video. He says he’s “hopeful that what they’ve done here is a bridge too far and they’ve exposed the whole system.” He adds “And the system because it’s been hidden it’s been little pockets of activity; this is 550 million doses administered to people in the U.S. [And]… billions of doses worldwide, and I think as this scandal collapses and unfolds—and again, I don’t know the timeline of that—it’s going to remake a lot of our institutions and I think that’s a good thing.”