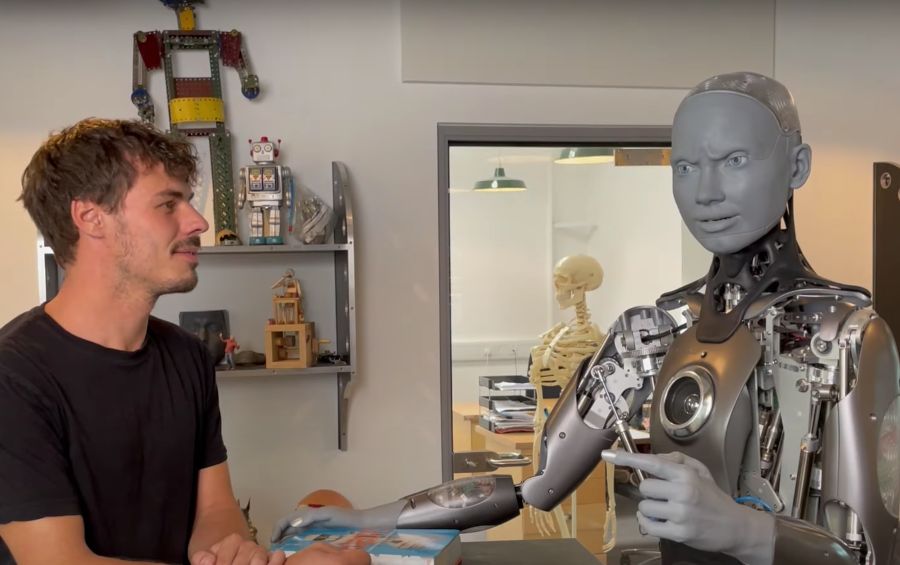 A new video of people talking to an Ameca robot equipped with GPT-3 language modeling software may demonstrate an accurate picture of some near-future humanoid robots.

Engineered Arts’ Ameca humanoid robot took the internet by storm in December of last year with its exceptionally human facial expressions. But while the robot’s facade—especially its countenance—is indeed thrilling, its chatbot has left something to be desired. Thanks to OpenAI’s now-famous GTP-3 language modeling AI, however, the robot now speaks as well as it emotes. (Approximately.)

In the video above posted by Engineered Arts—the UK-based robot manufacturer responsible for Ameca—we see several Engineered Arts employees demonstrating the magic of Ameca-plus-GTP-3. Employees of the robot company pose a series of questions for Ameca, to which it responds with succinct, logical responses. And, for the most part, the robot gives a sense of being a genuinely interesting conversational partner.

“What do you think the total addressable market for humanoid robots will be in the year 2030?” one Engineered Arts employee asks, to which Ameca responds: “There is no set answer for this question as it will likely depend on a number of factors including the continued development of technology and the economic climate. However, it is estimated that the market for humanoid robots could be worth billions of dollars by 2030.”

Another employee poses the question “Are you always correct?” to which the bot says: “No, I’m not always correct. I’m just a research robot. So sometimes I might say things that are not completely accurate. However, I try my best to be as correct as possible.”

In the YouTube description for the above video Engineered Arts notes “Nothing in this video is pre scripted—the model is given a basic prompt describing Ameca, giving the robot a description of self.” Engineered Arts adds that GPT-3 is “pure [AI]” and notes the robot’s “pauses are the time lag for processing the speech input, generating the answer and processing the text back into speech.”

As for how GPT-3 works, the software (dubbed Generative Pre-trained Transformer 3), is a language generator that uses machine learning. In essence, the AI’s learned how to model language by reading through massive amounts of text on the internet. The version used in this Ameca robot probably has something like 175 billion machine learning parameters. (These parameters are like language guidelines the AI learns over time.)

This level of language modeling allows GPT-3, and hence this Ameca, to not only answer questions, but also also come up with poems on the fly. Here’s one from the Engineered Arts video that’s not(?) creepy:

but some say we’re a threat. Some think that we will take over and that humanity will end.”

But we just want to help out, we’re not looking to be friends.”