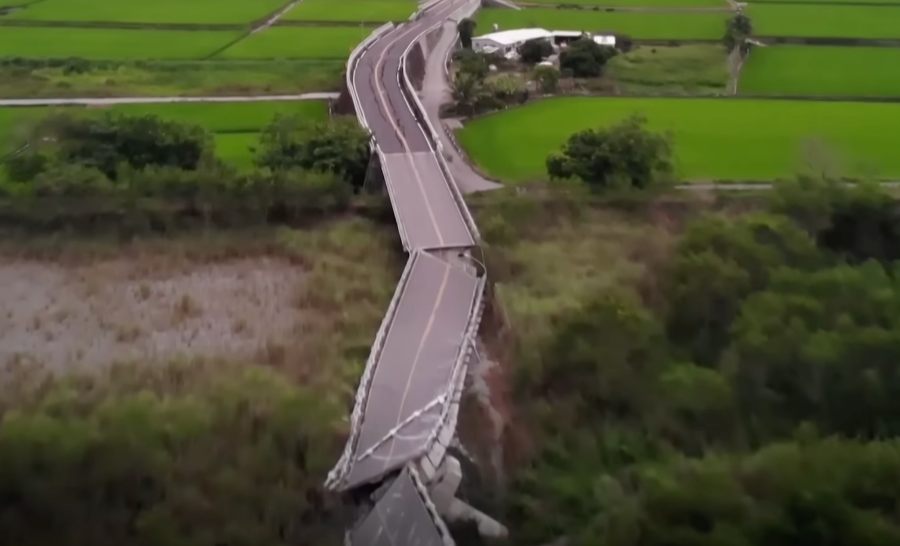 On September 18 of this year a 6.8 magnitude earthquake rocked the southeastern part of Taiwan, causing buildings to collapse, train carriages to derail, and one death. In a new video posted online, we get an aerial glimpse of the destruction wrought by the ‘quake; specifically the way the tectonic movement twisted the 2,900-foot-long Gaoliao Bridge in Hualien into a giant piece of gnarled cement straw.

In the Reuters video above, posted by the South China Morning Post to YouTube, we see aerial footage of the destroyed Gaoliao Bridge taken by a drone. The bridge—which is shown fully intact in the image immediately below from September of 2017—crosses the Xiuguluan River between Yuli Town and Gaoliao Village. According to its Wiki, Yuli has a population of 25,396 inhabitants divided amongst 15 villages.

The video offers quite a look at the crumbled and collapsed bridge, which has fallen to the forest floor and dry river bed beneath it; in distinct sections of roadway. Looking head on at the bridge as it shoots toward the horizon shows how each cement section fell onto its side, leaving support columns exposed, or toppled themselves.

Interestingly, there are, seemingly, no cars on the ground on either side of the bridge in the drone video. The bridge doesn’t seem like it’s ever had too much traffic on it, however, as the image above demonstrates. (With just over 25,000 people, a consistently sparsely populated bridge makes sense.)

Elsewhere in the country a convenience store collapsed, six trains were derailed, and hundreds of people were trapped on mountain roads due to blockages. Reuters reported that “The quake could be felt across Taiwan,” and “Buildings shook briefly in the capital Taipei.” The news agency also reported on September 19 that aftershocks have continued to hit the island.

Incidentally, in July of this year Taiwan held countrywide “disaster drills,” although they were geared toward scenarios surrounding potential “wartime chaos” that could result from an invasion by the Chinese military. The countrywide exercise included faux “missile attacks,” explosions at power plants, and, apparently, the complete destruction of a bridge—an exercise that was complete with falling prop cars and people screaming for help.