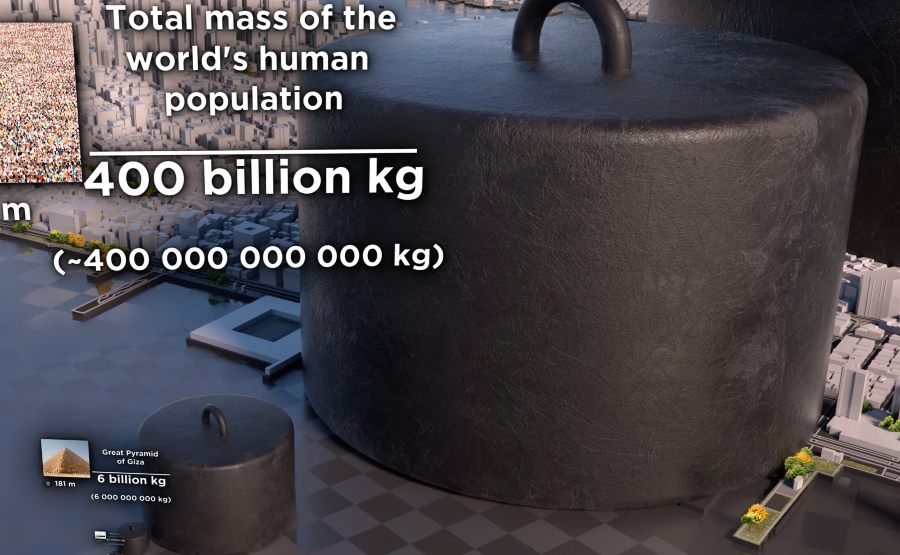 MetaBallStudios (MBS), a Spanish animator with a knack for comparing things in mind-blowing ways, is out with a new video. In his latest comparison MBS (a.k.a. Alvaro Gracia Montoya) shows how massive various objects are relative to each other, including everything from atoms to people to black holes. And while everybody can agree size matters, teeny, tiny things can be just as impressive as gargantuan ones in their own regard. (Really.)

MetaBall’s video—immediately above—begins with several objects that are on an intuitive, everyday level. He shows us that an orange has a mass of .15 kilograms (.33 pounds), a dollar bill, .001 kilograms (.022 pounds), and a drop of water, .00005 kilograms (.0001 pounds). From there, the video takes us on a Magic School Bus ride through the world of smaller and smaller objects until they quickly become smaller than the naked eye can see.

Following a look at the smallest object in the video—a graviton, which is an elementary particle that mediates the force of gravitational interaction—MBS resets the comparison to show more and more massive objects. (The switch happens at about the four-minute mark.) The journey up the scale of more and more massive objects resets to the orange, but quickly moves onto things like an average house cat (4 kilograms, or about nine pounds), an average adult elephant (5,000 kilograms, or about 11,000 pounds), and an average blue whale (180,000 kilograms, or nearly 400,000 pounds).

Things quickly grow awesome in mass, however, with things like the global annual human food production (or 8,818,490,487,395.104 pounds), the total carbon stored in the oceans (38 quadrillion kilograms), and even the dwarf moon Ceres (940 quintillion kilograms).