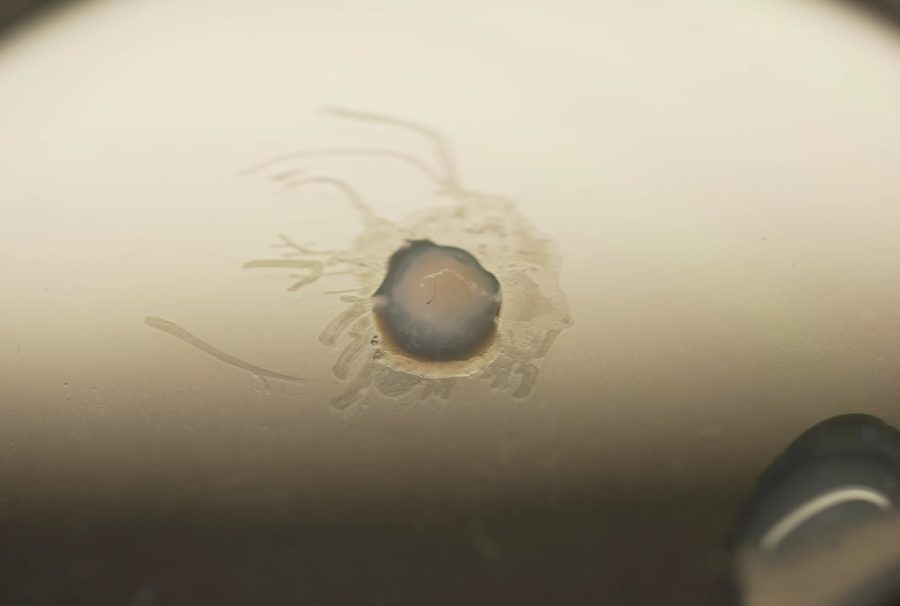 Scientists at Rice University in Houston have created a novel synthetic material out of genetically engineered bacterial cells that’s able to autonomously assemble into macroscopic structures that can “be programmed” to soak up contaminants (such as heavy metals) from their environment.

A team of scientists at Rice University in Houston has created a novel synthetic material out of genetically engineered bacterial cells that’s able to self-assemble—“from the bottom up”—into macroscopic structures. The scientists say the material, a type of engineered living material (or ELM), “can be programmed to soak up contaminants from [its] environment or to catalyze biological reactions,” and “should be relatively easy to modify… for optical, electrical, mechanical, thermal, transport and catalytic applications.”

The scientists, working in Caroline Ajo-Franklin’s eponymous research lab at the university, outlined their new ELM in a study published in Nature Communications. They note this work “provides genetic tools, design and assembly rules, and a platform” for growing ELMs that can have both their shapes and functions controlled.

According to the Defense Advanced Research Projects Agency (or DARPA), which partially funded this research, ELMs can be thought of as “building materials that combine the structural advantages of traditional building materials with the adaptive advantages of living materials.” Ostensibly allowing for the merger of inert biological materials such as wood, nails, bones, etc. with living cellular tissues and organs in order “to grow materials on demand where they are needed.”

To create their unique ELM the scientists genetically engineered the bacteria Caulobacter crescentus. C. crescentus, which is widely distributed in fresh water lakes and streams and capable of living off very tiny amounts of nutrients, has previously demonstrated itself as relatively easy to genetically modify hence its use in this context.

As Rice University notes in a press release outlining the team’s findings, the researchers modified C. crescentus to express a unique version of a protein it naturally produces, which “covers its outer membrane like scales on a snake.” The researchers say they developed the protein derivative “with characteristics not only favorable to forming ELMs… but also providing tags for future functionalization.” The researchers have dubbed the unique expression of the protein BUD for “bottom-up de novo,” which means, in essence, that the material is made from scratch.

In the case of this BUD-ELM made from genetically modified C. crescentus, the scientists were able to dry it out for up to three weeks and still regenerate it in 33% of cases, maintaining its ability to grow. The scientists say in their paper that they were able to collect the material from multiple cultures and form a “cohesive paste… that was extrudable through syringes with different diameters…. .” The team also experimented with mixing the BUD-ELM material with glass powder, forming a “cementing agent” that was able to harden into a solid composite.

“We wanted to prove that it’s possible to grow materials from cells, like a tree grows from a seed,” Sara Molinari, a postdoctoral researcher in Ajo-Franklin’s lab and lead author of the study, said in Rice’s press release. “The transformative aspect of ELMs is that they contain living cells that allow the material to self-assemble and self-repair in case of damage. Moreover, they can be further engineered to perform non-native functions, such as dynamically processing external stimuli.”

Ajo-Franklin added in the release that “One of [her] dreams is to use the material to remove heavy metals [such as cadmium] from water, and then when it reaches the end of its lifetime, pull off a little part and grow it on the spot into fresh material,” The laboratory head added “That we could do it with minimal resources is really a compelling idea to me.”