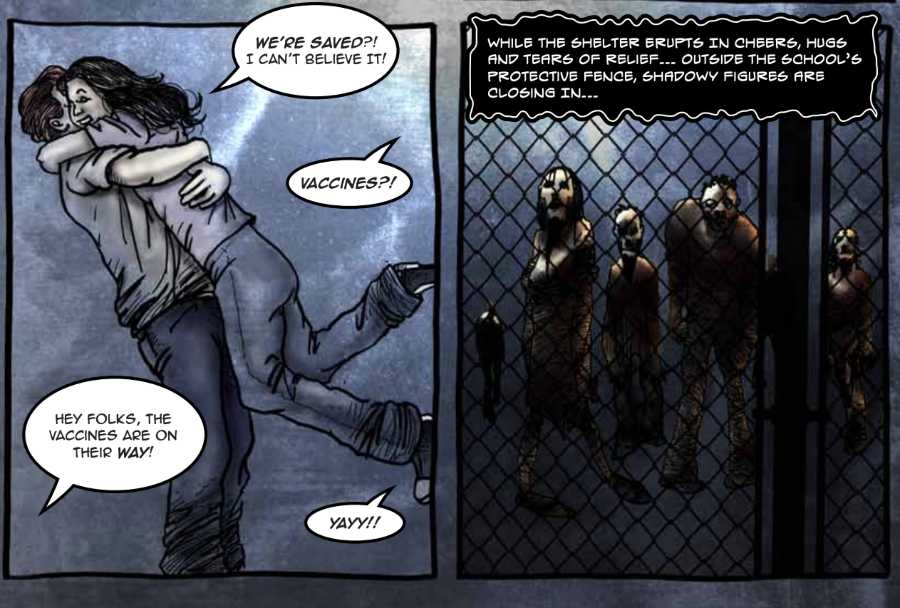 Here is an overview of everything the CDC has ever said related to zombies or the zombie apocalypse that’s currently available online. Note that while the CDC’s plans for a “zombie invasion” are largely a tongue-in-cheek way of encouraging people to prepare emergency kits for reasonable disasters (e.g. hurricanes), there are some disturbing details that could have real-world implications.

While it’s difficult to overstate how truly awful the Centers for Disease Control and Prevention (CDC) has been throughout the COVID-19 pandemic—evidenced by its flip-flopping on the efficacy of NPIs, its suppression of early treatment options, and its handing down of glaringly horrendous guidelines for nursing homes—many of its more conspiratorially minded critics have picked up on one particularly bizarre facet of the public health agency’s operation: its penchant for preparing people for the so-called “zombie apocalypse.” But has the CDC actually been serious about this scenario, or has it largely been a joke?

Taking this question into consideration, and reviewing every piece of evidence currently available online, it appears the whole “the CDC really thinks zombies will be a thing” worry is largely unfounded. Although there are a handful of proverbial red flags in this context. At least one of which is genuinely frightening.

Firstly, the CDC does apparently have a special affinity for zombies in popular culture. A search of the agency’s website for anything related to zombies turns up 12 blog posts related to the undead brain-eaters, including ones titled “Zombie Nation: Move over Dorothy, Zombies are Taking Over,” and “Zombie Nation: Making Zombies a Halloween Tradition.” The CDC even has a blog post dubbed “Zombie Nation: Required Reading… ‘World War Z'” as well as another Q&A post with the book’s author, Max Brooks. (For those unfamiliar, World War Z is a zombie novel written by Brooks that was published in 2006 and later turned into a highly successful eponymously named film starring Brad Pitt.)

Despite the occasionally provocative blog post titles (e.g. “Run for Your Lives” or “WARNING: Zombies Included!”), the CDC entirely couches its interest in zombies in the idea of educating the masses on disaster preparedness. Literally every single zombie-related CDC document (that I could find, at least) is related to preparing for some kind of pedestrian emergency, such as an earthquake, hurricane, or, of course, an outbreak of real disease.

Most notably, in 2011 the CDC put together a graphic novel titled Preparedness 101: Zombie Pandemic, in which we follow a couple and their dog as they navigate a world freshly infested with zombies. The 35-page graphic novel—which is illustrated and formatted like any other graphic novel—begins with the couple and their canine holed up in their home as the walking undead take to the streets.

During the story the couple continuously receives guidance from the CDC on how to best protect themselves from the zombie hordes. “The Centers for Disease Control and Prevention is recommending that people distance themselves from anyone displaying [zombie] symptoms,” a TV PSA says in one of the graphic novel’s panels. Another PSA warning from the CDC in one of the panel’s reads: “Stay in your homes. Do not go outside. If you or your family begin showing symptoms such as slowed movement, slurred speech, or violent behaviors isolate them to a secure area of the house. Stay tuned for more information on where to go… .”

Indeed, in a narrative arc that will feel painfully familiar to anyone in a nation decimated by the response to COVID-19, the CDC in the graphic novel calls for people to stay in their homes until a vaccine can be developed for the novel zombie virus (dubbed Z5H1). “Quarantine efforts here in Raleigh [the setting of the zombie outbreak in the graphic novel] haven’t done much to contain the spread of the [Z5H1] virus. Over half the city is now infected and new cases are showing up throughout the Southeast,” a reporter says in one panel. A news anchor adds that “The CDC is working with local health departments on a vaccine.”

After nearly running out of food, the couple and their dog make a run for a “safe zone” where they’ll be able to feed themselves as well as wait for the CDC to develop and produce a vaccine. Of course the couple is able to make it to one of the safe zones—after narrowly escaping attacking zombies—and wait it out until the CDC comes up with its inoculation; one that, interestingly, is based on the flu vaccine and enters the bloodstream of those who take it.

Despite the rapid and miraculous development of the vaccine, however, the graphic novel’s story ends with zombies overwhelming the safe zone and getting their undead hands on everyone from soldiers to scientists. That is, right before our protagonist (the male counterpart of the featured couple) awakens from a slumber and we realize the whole nightmare was just that: a nightmare. One that teaches the characters, and we as readers, the importance of being prepared for emergencies.

On its last page, the graphic novel ends with a list of things everybody should have in their “all-hazards emergency kit,” including things like a flashlight, extra batteries, food, water, cash, a cell phone and charger, etc. The list echoes the kinds of things that the CDC says people should have in their emergency kits in other zombie-related posts, noting that with the kit “You’ll be ready for any kind of disaster, even zombies.”

Despite the (literally) comical nature of the CDC’s interest in zombies, there is one “conspiracy theory” regarding the agency’s macabre fascination that could very well be considered genuinely disturbing. And that is the idea of an outbreak of (very real) prion diseases leading to the introduction of something approximately akin to zombie hordes into the real world.

Prion diseases, or transmissible spongiform encephalopathies (TSEs), are, as the CDC notes, “a family of rare progressive neurodegenerative disorders that affect both humans and animals… [that] are distinguished by long incubation periods, characteristic spongiform changes associated with neuronal loss, and a failure to induce inflammatory response.” Healthline.com notes that symptoms of prion disease include, more specifically: difficulties with thinking, memory, and judgement; personality changes like apathy, agitation, and depression; confusion or disorientation; involuntary muscle spasms; loss of coordination; insomnia; difficult or slurred speech; and impaired vision or blindness. Prion diseases are also almost always fatal.

As for the intersection of prion disease and the zombification of the masses, many conspiracy theorists say that prion disease sounds an awful lot like a real-world version of a zombie “disease.” Indeed, it’s not only speculative laypeople who think that’s the case. In a video from the hugely popular edutainment YouTube channel SciShow (above), one of the channel’s hosts describes prion disease as the result of “evil, little misfolded proteins that destroy brains and get passed from animal to animal by consumption of nervous tissue… or brain-eating.” The channel’s host notes the symptoms (which also include uncontrollable laughter and urination) and outcome of the disease means if you get it, “you zombify and then you die.”

Despite the fact that prion disease is exceptionally rare (the Dana Foundation notes there are approximately 250-300 new cases per year in the U.S.) there is robust and growing evidence that the COVID-19 “vaccines”—which are enormously harmful, as well as enormously ineffective—can cause prion disease. Above and below are several reports from VAERS (the CDC’s Vaccine Adverse Event Reporting System) highlighting individuals who’ve developed prion disease after receiving one of the mRNA injections.

“[On] June 2, 2021 [a vaccine recipient was] found unconscious in [her] home. [She has] lost 30+ pounds… [and is] in and out of conscience mental state since that date,” one COVID-19 vaccine-related VAERS report reads. “[She is] declining both mentally and physically on a daily basis. Neurologist is researching a Prion disease, which would be caused by the covid vaccine.”

“Therapeutic measures… were taken as a result of prion disease, encephalopathy. Impact on quality of life (10/10),” another VAERS report notes of an individual who received Pfizer’s mRNA COVID-19 “vaccine.” The report goes on to note “The patient was perfectly capable of moving freely and speaking and swallowing [prior to vaccination]. He/She is now in a vegetative state.”

Along with VAERS reports describing prion disease post mRNA COVID-19 “vaccination,” there are also more than a handful of reports of Creutzfeldt-Jakob (pronounced KROITS-felt YAH-kobe) disease (CJD) post COVID-19 “vaccination.” CJD, categorized as a type of prion disease, is a degenerative brain disorder that leads to dementia and, ultimately, death. The symptoms of CJD align perfectly with those of prion diseases in general and include: personality changes; memory loss; impaired thinking; blurred vision or blindness; insomnia; a lack of coordination; difficulty speaking; difficulty swallowing, and sudden jerky movements.

“The following information was reported: CREUTZFELDT-JAKOB DISEASE (hospitalization, disability, medically significant, life threatening) with onset [May of 2021], outcome ‘not recovered,’ described as ‘Creutzfeld-Jacob disease,” one VAERS report registered after a 53-year-old woman received a COMIRNATY injection reads. “The event ‘creutzfeld-jacob disease’ was evaluated at the physician office visit and emergency room visit.”

“Initially in August Loss of balance and then [vision] until MRI discovered prion inflammation (Creutzfeldt-Jacob disease),” another VAERS report reads. The report, submitted after a male received the COMIRNATY “vaccine,” adds “It was reported that hospitalization [was required] with [symptoms] worsening day by day. Unfortunately there was no cure for this disease. Impact on quality of life (10/10).”

It’s reports like these, as well as the fact that VAERS may underreport occurrences of disease and death by a factor of 100, that has conspiracy theorists speculating the COVID-19 injections could be the thing that leads to IRL zombie hordes. And while that may still seem far-fetched, it’s literally impossible to know what the long-term neurological effects of the COVID-19 “vaccines” will be. It certainly would’ve been nice if the CDC had done some preparation of its own and informed recipients of these novel, highly dangerous gene-altering injections that prion disease is one possible side effect. Rising from the dead, however, still seems impossible. Without technological intervention anyway.

Feature image: The Centers for Disease Control and Prevention