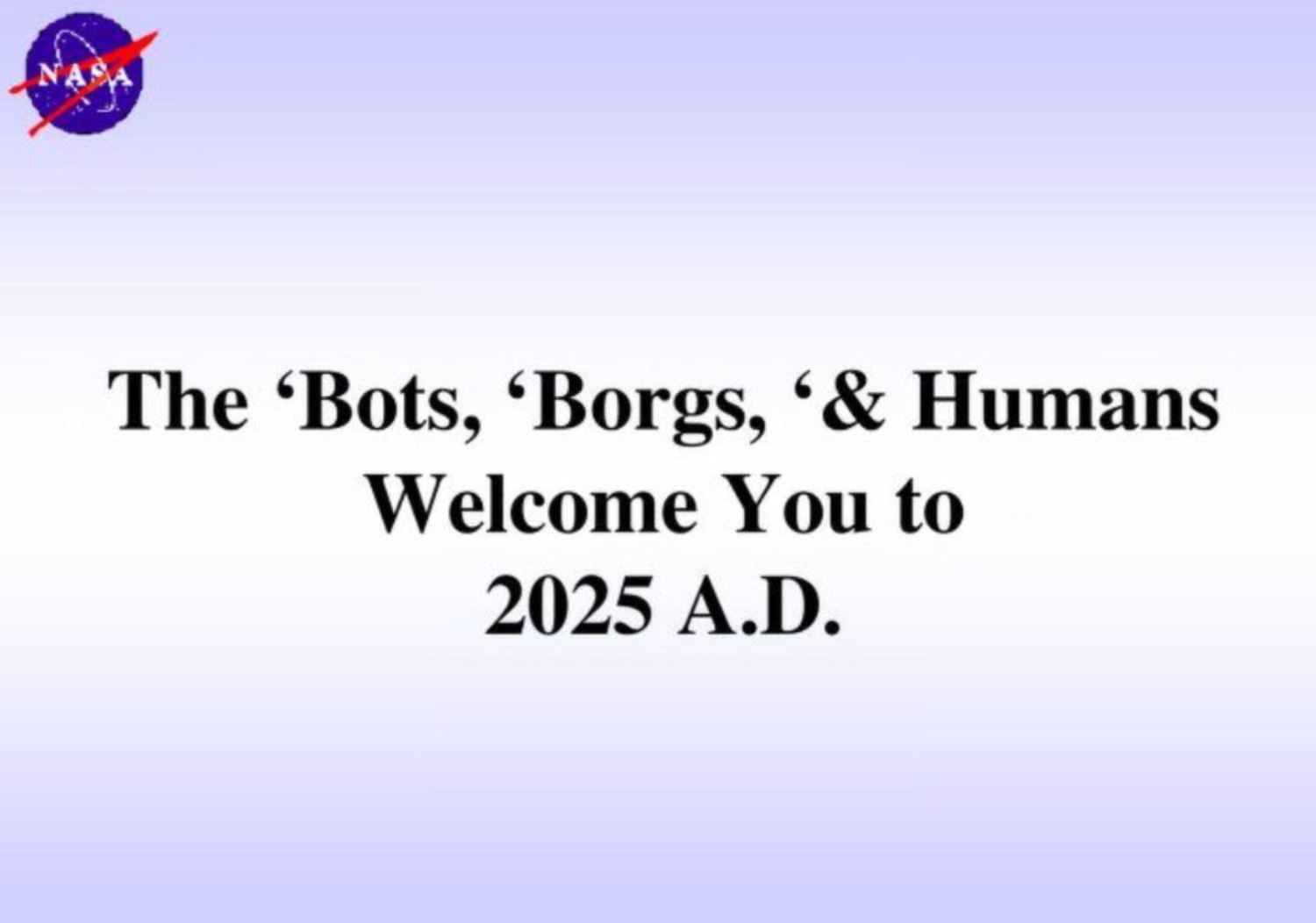 Here’s an overview of the infamous NASA “Future Warfare” presentation given by NASA Langley Chief Scientist Dennis Bushnell in 2012. In his presentation (preserved as a series of 113 slides), the scientist predicts what warfare will be like in 2025, discussing “explosive smart dust,” “antipersonnel [microwave/radio-wave] weaponry,” “genetically engineered pathogens,” “brilliant sensor mines,” and even “beam weapons.” (Incidentally, Bushnell has also spoken on the topic of overpopulation, and believes a mechanism for “population control” may be in order.)

On August 14, 2001 at the 4th Annual Testing and Training for Readiness Symposium and Exhibition organized by the National Defense Industrial Association (NDIA) and held at the Rosen Centre Hotel in Orlando, Florida, NASA Langley’s Chief Scientist Dennis M. Bushnell offered his glimpse of “Future Warfare” circa 2025. Bushnell’s presentation—the slides from which are available in full online—outlined an array of weaponry that seems either sci-fi, or oddly familiar; including, but not limited to, “genetically engineered pathogens,” “explosive smart dust,” “antipersonnel [microwave/radio-wave] weaponry,” “miniature, brilliant sensor mines,” and “beam weapons.” Perhaps an odd focus as NASA Langley—which directly borders Langley Air Force Base in Virginia—says it’s focused on aviation, space travel, and an expanded understanding of Earth’s atmosphere.

In Bushnell’s presentation, the NASA scientist paints a picture of a world where non-cyborg humans are decreasingly useful, and where artificial intelligence (AI) is increasingly the apex of intelligence on Earth. Via his slides Bushnell notes that despite reactions to his presentation consisting of responses like “they would not do that” or “we have to [h]ope they would not do that,” he certainly makes the novel world that blends human and machine, and potentially military and civil life, seem inevitable.

Bushnell’s slides begin with the statement that his predictions are “based in all cases upon existing data/trends/analyses/technologies” and not on “pixie dust.” Indeed, while only some of his predictions are accompanied by citations of real-world technologies, they offer ample evidence that even Bushnell’s more outlandish speculations are certainly within the realm of possibility. For his thoughts on the confluence of internet technology, biology, and nanotechnology, for example, Bushnell references “Chew-Chew”: a 12-wheeled “flesh-eating gastrobot” developed in 2000 that ran on microbial fuel, as it was able to break down food and convert it into electrical energy.

While it’s difficult to say which one of Bushnell’s claims seems most alarming (or perhaps exciting, for those enamored with war), almost every weapon he discusses seems like a technological impetus for an especially bleak Black Mirror episode.

Bushnell notes, for example, that “micro dust weaponry” could be used to “mechanically [bore] into lung tissue and [execute] various ‘Pathological Missions.'” Bushnell also speculates on the use of “explosive smart dust,” which would allow for the “optimal positioning” of air explosives. For those unfamiliar, smart dust refers to—as Nanowerk notes—”wireless networks of sub-millimeter-scale autonomous computing and sensing platforms not larger than a grain of sand.” It seems promised forms of non-lethal smart dust haven’t come to fruition yet, at least in the retail market.

Just as sci-fi as the explosive smart dust mentioned in Bushnell’s presentation are “low power microwaves” capable of inflicting various types of damage on people. Bushnell’s slides note that these kinds of microwaves can be used to induce “behavioral performance decrements,” seizures, “gross alteration in brain function,” and even death. Indeed, while this idea may seem “conspiratorial,” there is plenty of evidence of the phenomenon in the scientific literature.

Bushnell’s slides also reference weaponry that is, perhaps, easier to accept as plausible, but just as disturbing. (Again, depending on one’s point of view.) Bushnell presents, for example, different forms that “natural warfare” could take, including the use of animals (e.g. urban rats) as “delivery systems” for poisons or munitions. On the same, more believable, (metaphorical) page, Bushnell discusses the use of cruise missiles in warfare; albeit with “hordes” of them that are “very capable [and] easily concealed,” as well as “very difficult (and expensive) to counter… .”

On the more familiar side of the tech in the presentation Bushnell also covers, of course, “genetically engineered pathogens that [can] thwart… bio detection/defense [and] measures/cycles.”

The NASA scientist, on the other, more conspiratorial hand, also mentions that “beam weapons will become increasingly relevant.” Unfortunately, Bushnell doesn’t elaborate, but beam weapons are generally thought to be “[weapons that use] a beam of energy or radiation (such as a laser beam) to inflict damage.” (As for whether or not space-based beam weapons are possible, The Pentagon certainly thinks so, as it’s apparently testing one in 2023.)

Aside from the various types of revolutionary weaponry, Bushnell’s general narrative tells a story of humans necessarily merging with artificial intelligence and computers. “It will soon be possible to connect human brain cells to silicon chips,” one of Bushnell’s slides reads. In fact, amongst this array of technologies, the idea of a brain-machine interface (BMI) is perhaps one of the less fantastical advancements, despite it likely being the most consequential. BMIs have already been case tested amongst those who suffer from paralysis on many occasions, for example. Everybody has also heard of Elon Musk’s Neuralink by now as well, although the product is still in its infancy.

Connection to computer chips seems like it’s necessary for humans to survive according to Bushnell’s slides. Without that connection, Bushnell claims there are “increasingly critical human limitations [and] downsides.” He notes in one particular slide that humans are “large,” “heavy,” “tender,” “slow (both mentally [and] physically,” and “require huge logistic train(s).”

Bushnell goes on to discuss more technologies that either sound sci-fi or familiar (or both); including things like “blast wave accelerators,” “cross-species molecular breeding,” “directed evolution,” “PSYWAR,” and an airborne version of the Ebola virus. However, despite the staggering ingenuity described by Bushnell (whether it be moral or immoral), perhaps much of what he mentions in the slides should be taken with a pinch of salt. Because, apparently, he’s frequently been wrong about his predictions. (Way wrong.)

In his above BlueTechResearch keynote talk from 2012, for example, Bushnell says that by the 2014-2018 period the arctic would be ice-free in the summertime. Arctic Sea Ice News & Analysis, however, noted that as of September 2022 the summertime Arctic sea ice extent was 4.87 million square kilometers (1.88 million square miles) and is now increasing in size as it does every season. (Although to be fair, the news site does note that the amount of summertime ice has been sharply declining over time.)

Bushnell also says in his talk that “if you want to buy stock [he suggests] Joule biotechnologies.” In August of 2017—unfortunately, for those excited to get in on the next great thing in biotech—the company shuttered after management was unable to raise funds.

Perhaps Bushnell’s most egregious prediction error, however, was that human population growth is so out of control we need to shrink the species down by possibly instigating “population control.” Which is unequivocally, utterly unnecessary as human birth rates are declining across the developed world. And, as Tesla and SpaceX CEO Elon Musk notes, population collapse is actually the big demographic problem that humanity faces; not overpopulation. It is thusly unclear how accurate Bushnell’s timelines and estimates of feasibility are in his “Future Warfare” presentation.