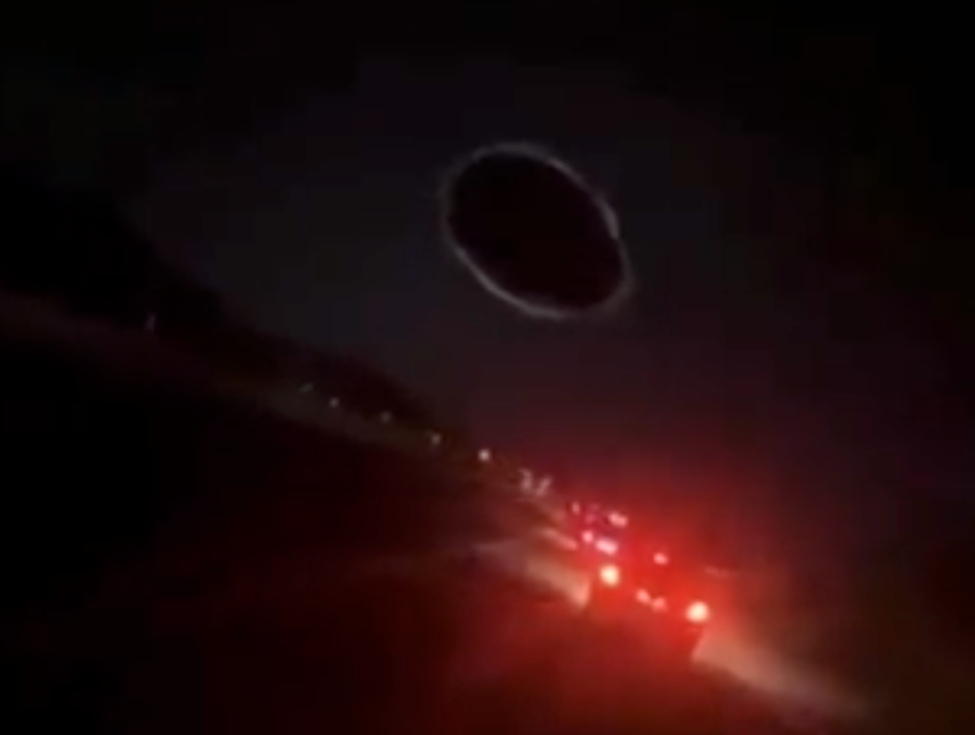 A new, viral video of a black hole (or portal?) in the night sky above Switzerland near CERN has conspiracy theorists speculating as to what it may be. CERN—a research center that operates the largest particle physics laboratory in the world—has not acknowledged the video on any of its social media accounts, and it is possible the video has been altered in some way.

In what can aptly be described as catnip for conspiracy theorists The Great Reset Times, “a channel of the people, by the people, and for the people,” is reporting on Telegram that some kind of black hole—or perhaps a black portal?—has appeared in the sky above Switzerland, near CERN. There is apparently no confirmation of what the mysterious object is, or whether or not it’s even a real phenomenon (as opposed to a CGI video). But speculation about what it could be is still running rampant online.

In the video immediately above, which was re-posted to Twitter by the popular account Wittgenstein, we see an 11-second-long glimpse of the mysterious, lightless object in the sky. The brief video, which features no commentary, shows what appears to be a handful of cars pulled over to the side of the road—presumably by drivers who wanted to take a good look at the strange, circular gap in the firmament. The black portal-hole-object-thing is outlined by what appears to be a silvery white ring, which marks the border between the normal night sky and the dark object.

CERN, or the European Organization for Nuclear Research (Conseil Européen pour la Recherche Nucléaire in French), has not commented on the video via any of its social media accounts—including Twitter, YouTube, and Instagram—as of this writing.

CERN, a research center that operates the largest particle physics laboratory in the world, has been the subject of many a conspiracy theory. As The U.S. Sun reported in July of this year, “People have expressed their concern about the ‘portal’ that will open [at CERN] after two high-energy particle beams travel at close to the speed of light before they collide” in the Large Hadron Collider (LHC). The LHC is the world’s largest and highest-energy particle collider, and primarily collides proton beams. As Brittanica notes, “One goal of the LHC project is to understand the fundamental structure of matter by re-creating the extreme conditions that occurred in the first few moments of the universe according to the big-bang model.”

Christians in particular appear to take issue with CERN and the experiments being performed with the LHC. The website Christian Evidence, for example, noted in May of 2019 that “What [CERN] scientists are really trying to accomplish… is to access an inter-dimensional doorway… .” The website references a real quote by former CERN Director Sergio Bertolucci, who said in 2009 that the LHC could possibly “create” or “discover” an “extra dimension.” Bertolucci said that “Out of this door [an alternative label for the extra dimension] might come something, or we might send something through it.”

Bertolucci also said in 2009 that the LHC could only potentially open the “door” for 10-26 seconds. He added that “after this tiny moment the door would again shut, bringing us back to our ‘normal’ four dimensional world.” The former CERN Director also said that “[there would be] no risk to the stability of our world.”

Conspiratorial speculation surrounding CERN has also arisen due to several other factors, including the research center’s decision to place Shiva, the Hindu “God of Destruction” outside of its headquarters. (See image immediately above.) Some have also speculated that CERN’s logo is a covert “666” symbol—hinting at the so-called “number of the beast” that is associated with the Beast of Revelation in chapter 13, verse 18 of the Book of Revelation.

It’s unclear what experiments have been performed using the LHC lately (in November), although the collider will apparently be operational until November 28 of this year. It is set to shut down on that date—two weeks earlier than planned—as the collider uses large amounts of energy and there is “an energy shortage” in Europe as Euro News has reported.