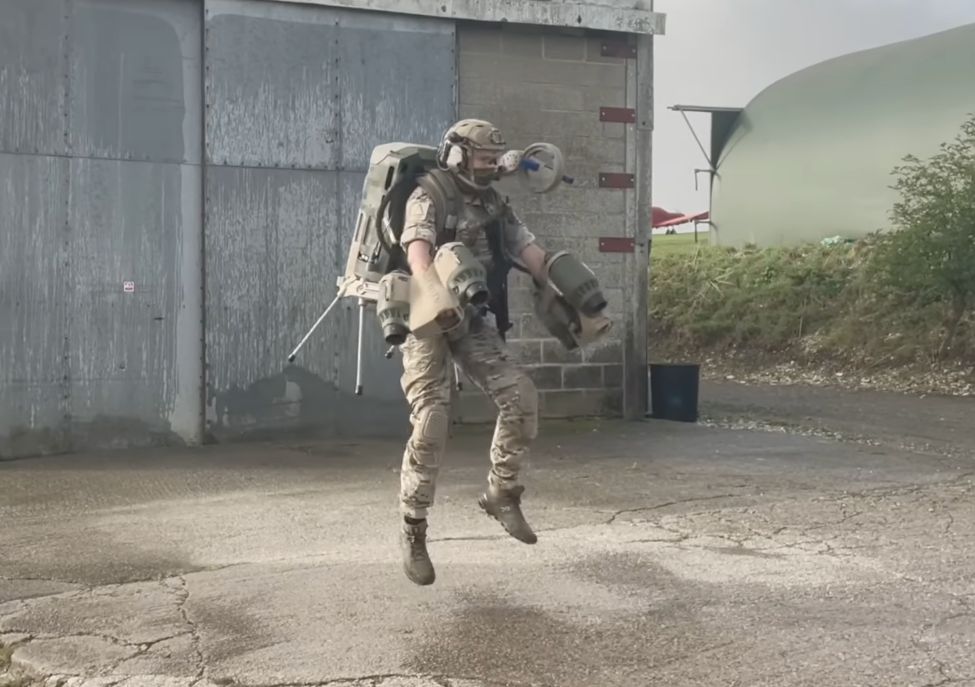 In this video from Gravity Industries we see a demonstration of the company’s 1,000 horsepower “Jet Suit” used in a tactical military drill. The demonstration features the company’s founder using the $450,000 suit to fly into and out of a theoretical combat situation in a matter of seconds, although it’s easy to imagine the enormous downsides of using such a device in real warfare.

On the mountain heap of terrible ideas, rolling out wildly dangerous mRNA injections (which may also have other things inside of them) for the seasonal flu is at the very top. However, just a few steps down from there is Gravity Industries’ “Jet Suit.” That is, a combination of a jet fuel-filled backpack and a pair of handheld jet engines that’s able to propel its wearer high into the sky for minutes at a time. In a new viral video, we see the Jet Suit used in one of its stupidest capacities: as a tactical suit for an armed soldier.

In the video immediately above Gravity Industries Founder and Chief Test Pilot Richard Browning demonstrates how a soldier could use the company’s Jet Suit—which costs a cool… err blazing hot $450,000 before taxes—to fly into a location, perform his necessary tasks (e.g. shooting people), and then fly away.

While the video is only about 90 seconds long, it’s enough to offer a sense of how the Jet Suit would operate in a combat situation. In the bottom left-hand corner of the video, we see a time counter showing how quickly a soldier could land and be ready to fire his weapon; as well as how fast he could dismount the Jet Suit, or put it back on and fly away like Iron Man looking for a bathroom after having four cups of coffee and a bag of Olestra chips.

Of course, Browning demonstrates that all of these Jet Suit maneuvers could be pulled off in a matter of seconds, unharnessing himself from the 1,000 horsepower propulsion system and drawing his rifle like a boss. The backpack full of jet fuel even has four little legs allowing a wearer to set it down on the ground in a pinch.

On top of that, Browning has previously demonstrated how the Jet Suit could be used by soldiers to broach and land on a ship out at sea. We see an admittedly spectacular demonstration of that in the viral video immediately above. Browning has also shown how he can land on much smaller boats.

However, the litany of downsides for the Jet Suit are easy to imagine. In the military use-case, for example, a backpack full of jet fuel may not be the best thing to have in a live firefight. And, once a soldier is airborne, the Jet Suit basically turns him into a flying target without any defensive or offensive capabilities. Not to mention the fact that the suit looks ridiculously difficult to control, even for Browning himself, who is surely the system’s most experienced user.

Regardless of how useful the Jet Suit is, however, it’s easy to imagine the U.S. government ordering thousands of them. We live in a clown world at this point, after all, and federal agencies love to spend good taxpayer money on ridiculous, pointless garbage. Again, like “vaccines” that don’t actually stop infection or transmission. At all.