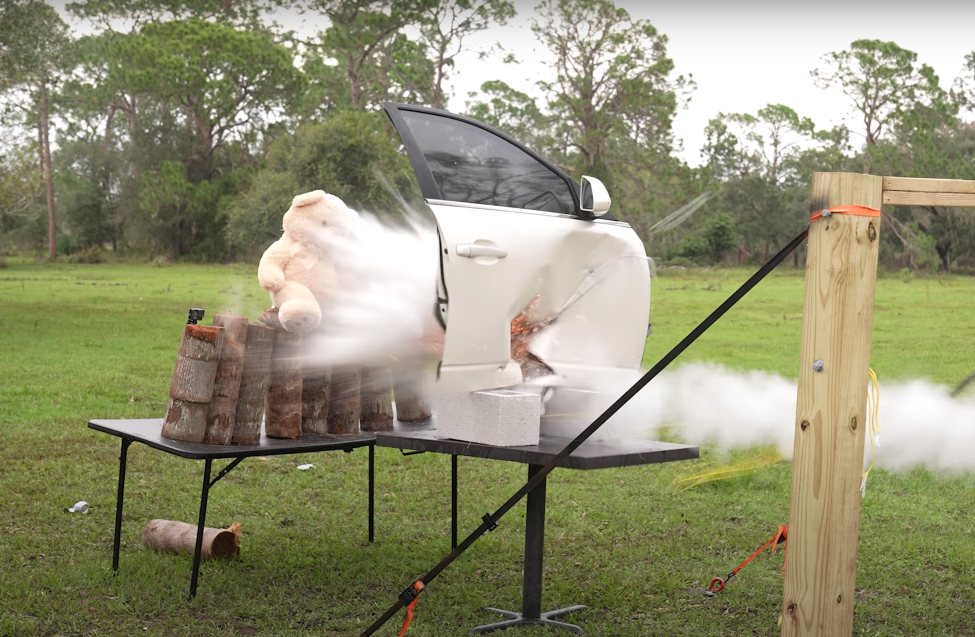 In his latest video scientist and YouTuber TheBackyardScientist shows off his 400 mph “rocket knives,” which are capable of cutting through car doors and refrigerators like they’re made of tissue paper.

Although homemade science experiments and tech projects are always fun for those with inquisitive minds, experiments and inventions that tend to be the most fun are—almost always—on the more dangerous side. This LiDAR-guided knife-throwing machine created by engineer and YouTuber Quint BUILDs, for example, is so entertaining people would doubtlessly pony up big bucks for a retail version of it. Now, in another dangerous—and knife-happy—DIY-but-why?! project YouTuber TheBackyardScientist has created a series of “rocket knives.” Ones that top out at 400 mph and can blow through a car door like it’s made of warm butter.

In the video above TheBackyardScientist—a.k.a. Kevin Kohler—shows how he built and tested his 400 mph rocket-knives, with each three-pound homemade ballistic using 500 grams of “rocket fuel” to propel itself to its extraordinary speed. (For reference, the land speed record for a car is approximately 763 mph.)

Although the rocket-construction process looks pretty complicated in Kohler’s video, he dumbs it down for all we normies, explaining, in essence, that for each rocket he: took a rocket casing, filled it with distinctive sections of solid rocket fuel, capped it on one end with an engine nozzle, and then stuck a splay of knives on the other end—that is, the wildly dangerous business end.

To get the rocket knives to function, however, Kohler shows how he uses a suspended cable as a guidance mechanism; taping any one of the given rockets to a tube wrapped around the cable allowing the deadly contraption to stay steady and on course. Despite the fact that each knife rocket is front-end weighted, meaning it otherwise would’ve just spun out of control as soon as being lit. Something that happens to all of us from time to time… .

The actual demonstration of the rocket knives in action begins around the four-minute mark, with Kohler using random objects such as soda cans, a watermelon, a pumpkin, and even some logs as his target. And while the rocket knives have an impressive start, it’s not until Kohler sets up a car door as a target that we see the true destructive power of the bladed missiles. Because, at that point, we see how easily the 400 mph weapons can cut clean through layers and layers of metal like they ain’t nothin’.

Kohler then demonstrates a few more rocket knife failures before showing off his grand finale: a rocket knife shot straight into a refrigerator filled with propane tanks, as well as a standalone microwave for good measure. That explosive demonstration, which begins around the 11-minute mark, evinces the true destructive power of Kohler’s creations. As well as a fairly large explosion that adds a whole new level of theater to the engineering experiment. As well as a new benchmark for excitement that other YouTubers who enjoy projectiles now must match.