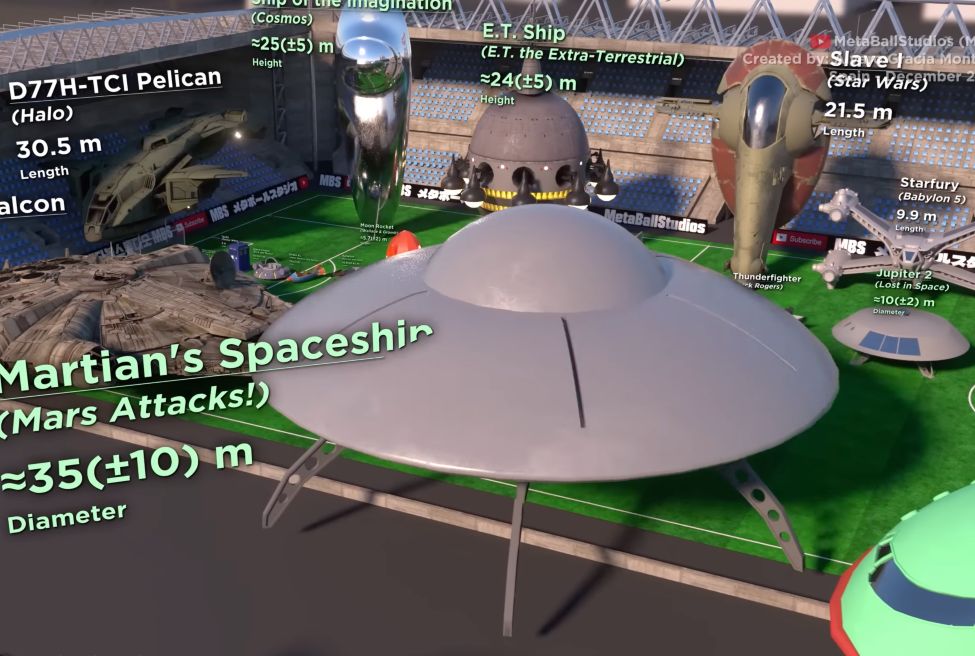 In one of his latest videos Spanish animator MetaBallStudios (MBS) compares the size of dozens and dozens of spaceships and space stations from sci-fi and real life, including everything from the Enterprise-D from Star Trek to SpaceX’s Starship to Rama from Rendesvouz with Rama.

MetaBallStudios (MBS), a Spanish animator with a knack for comparing things in mind-blowing ways, is out with a new video. In his latest comparison MBS—a.k.a. Alvaro Gracia Montoya—compares various spacecraft from sci-fi films, TV series, novels, and real life, offering a (literally) cosmic size comparison. As well as a whole new sense of just how big the USS Enterprise is compared to a Star Destroyer.

In Montoya’s video immediately above, the animator has amassed a collection of dozens and dozens of spaceships and space stations, all with their lengths displayed based on either real-life stats or stats from the spacecrafts’ respective universes.

Montoya’s video—which is epic in its own length at 18 minutes long—begins with relatively teeny tiny spaceships, including Benny’s spaceship from The LEGO Movie (16 inches long, plus/minus 2 inches) and Serleena’s Ship from Men in Black 2 (12 inches, plus/minus about 8 inches).

The video quickly moves on from “wreckable with a baseball bat” size to ships people could actually fit into including the Space Cruiser from Rick and Morty (about 13 feet in diameter), Alpha Vector from No Many’s Sky (24 feet long), and a TIE Fighter from Star Wars (24 feet tall).

At around the 4:40 mark in the video, spaceships begin to surpass 100 meters (328 feet) in length, beginning with a spaceship from real life: SpaceX’s Starship, which—when fully stacked—is just shy of 400 feet tall. Soon thereafter the ships grow jumbo enough to function as their own tiny cities, with Space Station V from 2001: A Space Odyssey at nearly 1,000 feet in diameter, the Enterprise-D from Star Trek at 2,100 feet long, and Reaper and Destiny Ascension from Mass Effect at about 1.24 miles long apiece.