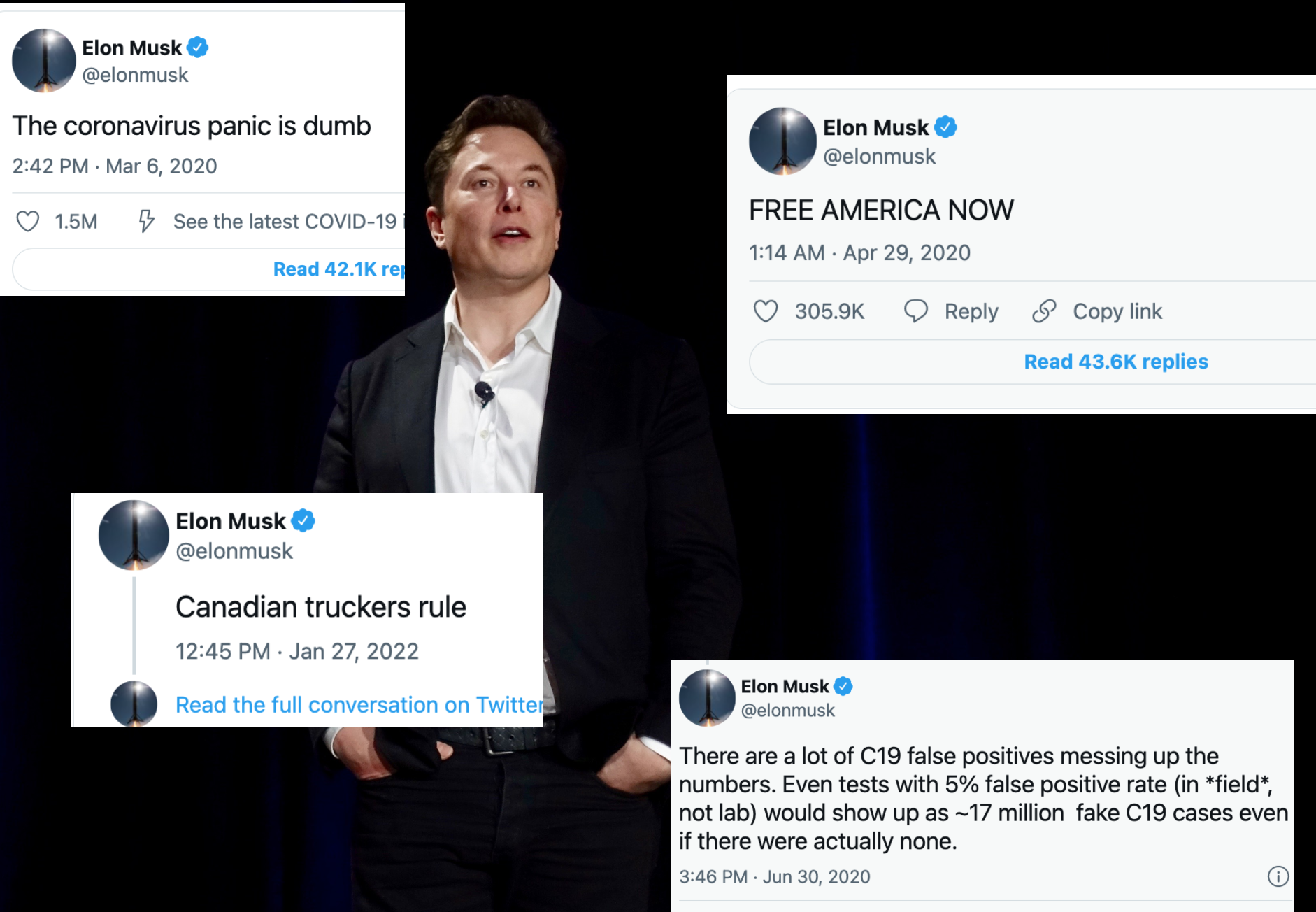 Here is a running list of Elon Musk’s tweets supporting sanity and the mitigation of the communist mind virus known as “COVID-19 public health measures.”

Since 2020 the CEO of SpaceX and Tesla has voiced support for freedom, medical choice, and limitations on the U.S. government’s ability to intervene in citizens’ lives. Beginning in March of 2020 Musk referred to the “coronavirus panic” as being “dumb,” and, famously, shouted on Twitter “FREE AMERICA NOW” after much of the country’d been in indefinite lockdown.

In 2022, when Canadian truckers and their Freedom Convoy occupied the cities of Ottawa, et al., Musk supported them openly. Even going so far as to meme Justin Trudeau as being Hitler with a bad budget.

NOTE: In the above tweet from April 26, 2020 Musk references a video featuring the pair of doctors (Dr. Dan Erickson and Dr. Artin Massihi) in the Perspectives on the Pandemic video below. The doctors were some of the first in the U.S. to announce the true (and far less dangerous) threat posed by COVID-19:

NOTE: In the below tweet Musk responds to a meme downplaying the impact of the COVID-19 measures by noting, implicitly, that they’re actually a big deal.

NOTE: In the below tweet from May 17, 2020 Musk asks people to take the “red pill.” “Red pill“ and “blue pill” refer to “a choice between the willingness to learn a potentially unsettling or life-changing truth by taking the red pill or remaining in contented ignorance with the blue pill.”

NOTE: In the below tweets Musk points out that hospitals in California were never overrun with patients—of course, the argument in favor of “two weeks to flatten the curve” was always that hospitals needed “saving” from overcrowding.

NOTE: In the below tweets from June 4, 2020, Musk is defending the ability for Alex Berenson to sell his book, Unreported Truths About COVID-19 and Lockdowns, on Amazon. Amazon had pulled Berenson’s book until Musk intervened. Unfortunately, later on, Twitter still suspended Berenson. (He is now on Substack.)

NOTE: In the below tweets Musk highlights the difference between dying *WITH* COVID-19 and dying *OF* COVID-19. He also points out that there is a massive false-positive rate with regards to the COVID PCR tests.

NOTE: In the below tweets Musk highlights Sweden’s relatively lax COVID-19 measures as the correct approach to dealing with COVID-19.

NOTE: In the tweet below Musk again highlights the untrustworthiness of the COVID-19 tests.

NOTE: In the tweet below Musk asks Abbott Labs to come up with a fast antibody test; a test that would have allowed the public—at the time—to understand COVID-19 was more prevalent than thought; in turn showing that COVID-19 has a relatively harmless IFR (Infection Fatality Rate) for most people.

NOTE: In the below tweets Musk voices his support for Canadian truckers, who, in early 2022, began a people’s movement against “vaccine” mandates.

On top of voicing his support on Twitter for freedom and minimal governmental interference in people’s lives, Musk has also repeatedly come out against fascistic lockdowns and mandates elsewhere.

On the same call Musk said:

“The extension of the shelter-in-place or frankly what I would call it, forcibly imprisoning people in their homes against all their constitutional rights … my opinion … and breaking people’s freedom in ways that are horrible and wrong and not why people came to America or built this country,” Musk added. “What the f***. Excuse me. Outrage. So it will cause great harm, not just to Telsa, but many companies. And while Tesla will weather the storm there are many small companies that will not.”