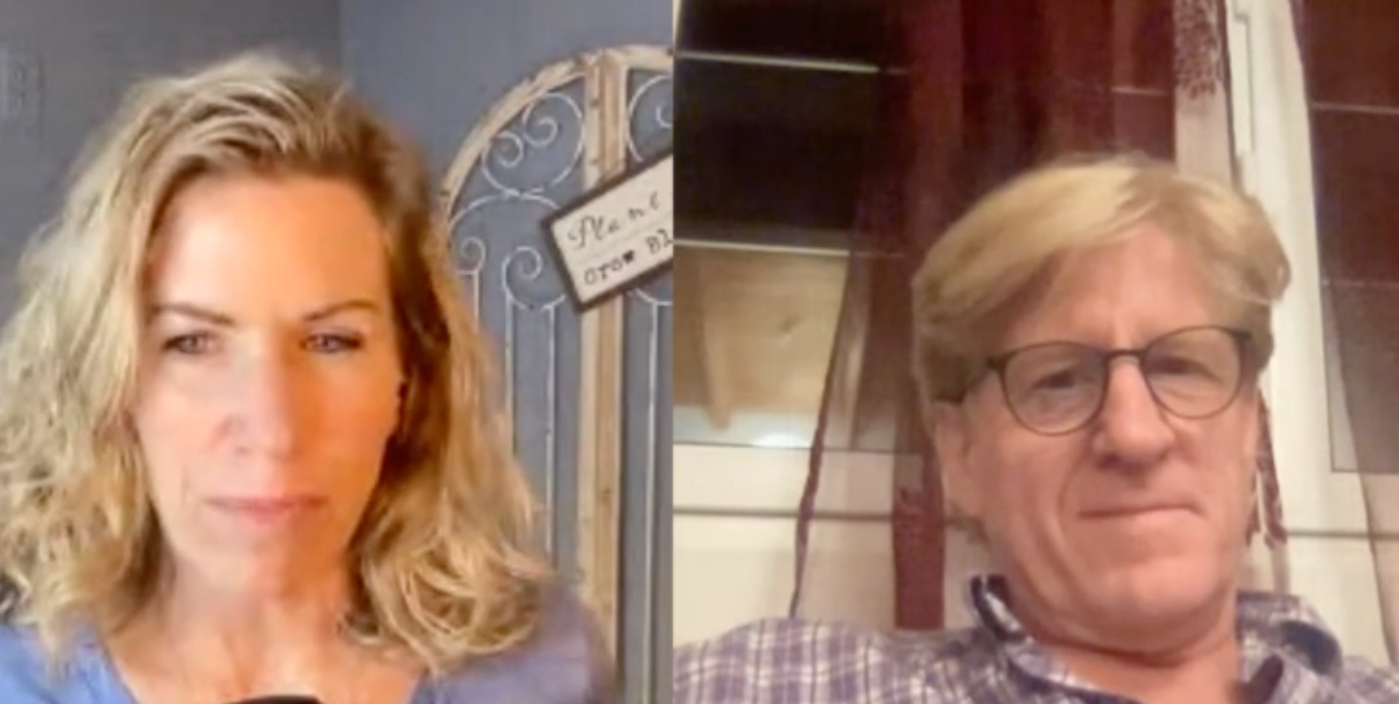 Here is an interview former co-host of the War Room: Pandemic podcast Jack Maxey did with Mary Grace. In the interview Maxey discusses, amongst other things, the illicit and illegal content on Hunter Biden’s infamous laptop.

In the video immediately below is an interview Mary Grace—of Mary Grace Media—conducted with journalist, former Navy officer, and former co-host of the War Room: Pandemic podcast with Steve Bannon, Jack Maxey. Maxey, who currently resides in Switzerland for safety reasons, received the contents of Hunter Biden’s infamous forgotten laptop from Mayor Rudolph Giuliani in October of 2020.

Below the two-hour-long video interview are selected timestamped and transcribed portions of Mackey’s answers to questions. Mackey describes several astounding revelations, saying things like “There are dozens and dozens of trafficked women all over Hunter’s laptop. Hundreds of transactions with these women, hundreds of transactions with drug dealers and other human traffickers from Ukraine to Moscow to Los Angeles” and “Every law that Hunter violated aside from the espionage ones are state crimes too; money laundering, human trafficking, pedophilia, all these things can be prosecuted at the state level.”

NOTE: Every quote is attributed to Maxey unless otherwise indicated with the use of initials in red.

“I operate from the principle liars lie, cheaters cheat, and if they’re cheating, probably the low-hanging fruit are going to be found inside [Hunter et al.’s] brokered dealer, Rosemont Seneca…the investment firm run by Hunter Biden and his partners in Washington, DC; formerly the brokered dealer attached to the Heinz family of Pittsburgh, John Kerry’s benefactors. So we began looking at it. And I would say within 25 minutes I found SEC violations FINRA [Financial Industry Regulatory Authority] violations, backdating of documents, illegal reporting, what appeared to be falsification of accounts, etc. Things that put regular Americans in jail every day… . Since then, it’s obviously become a real horror show. Very clear evidence of collusion with the Communist Chinese. My contention is that Burisma… was an arm’s length, one-degree of separation, classic Chinese kind of espionage approach in which they never make direct payments to the target, they pay someone else to get the money to them. Because every time Hunter traveled with Burisma it was always on China’s business.”

Minute 7:30: “The purpose of [Hunter Biden’s 2014 trip to Khazakstan in which he didn’t take any Secret Service members] clearly, 100% in writing, I think it’s the pinned tweet on my GETTR page… and they were there to meet [Prime Minister Karim Massimov]…they were there to have him carve out the premiere oil and gas leases in Khazakstan… .”

Minute 11:30: Hunter had a spy placed in Rosemont Seneca placed there by the Communist Chinese ironically in America and Chinese heritage – this person shared a wall with the Icelandic ambassador

Minute 14:00: “[I]n the last three days we found 450 gigabytes of erased material: that would include hundreds of thousands of emails we didn’t know anything about, 80,000-plus images and videos we didn’t know anything about. Thousands and thousands of documents. We believe that we’ve also been able to recover all the attachments, which we were never able to see before.”

Minute 15:00: “When we began looking at the photographs from the 80,000 images, one of my guys was like whoa, they’re all little girls. I said, ‘stop. Stop. We’re not going to look at another photograph because if we find what we suspect is on there we have to go to the Swiss police. So at the end of this week, that’s what we’re going to do.”

Minute 28:00: “The images you’re seeing all over the internet with Hunter and children and one where he’s on a stripper pole—if you enhance that photograph the woman is a 45-year-old Southeast Asian woman; Thai or Vietnamese… . The one with the little girl on the leash, that’s not on the laptop that I’ve ever seen.”

Minute 36:00: “Every law that Hunter violated aside from the espionage ones are state crimes too; money laundering, human trafficking, pedophilia, all these things can be prosecuted at the state level.”

Minute 35:00: Maxey notes that Rudy Guiliani and Bernard Kerik behaved as “responsible American patriots and gentlemen” because the first thing they did after receiving Hunter’s laptop “was not deliver a copy to me, the first thing they did was deliver a copy to the Delaware State Child Protection Unit, which ironically was founded by Beau Biden. And remember the Biden family has a foundation called the Beau Biden Foundation and you can look it up—the stated purpose is to protect little children from child predators. And Hunter was sitting on the board while he was being accused by his own family of abusing his niece.”

Minute 46:00: Maxey notes he gave the contents of Hunter’s laptop to Chuck Grassley and minority members on the Senate Judiciary Committee on July 8, 2021.

“If you want to understand about Hunter Biden and the Communist Chinese and their purchase of strategic assets in countries other than Ukraine, I can talk to you about the purpose of Bohai Harvest—a $1.5 billion private equity fund—it was funded by the bank of China, which would mean Chairman Xi; let’s remember Joe Biden was the point man for two things for Barack Obama—he went to Ukraine because his job was to make sure he kept the Russians out of Crimea. He fails. Hunter gets a job with Burisma, the company that profits most from the Russian occupation of Crimea because that’s where all their gas assets are—they still pump it across the old Soviet pipeline, straight across Ukraine, straight across Poland, and he fails. And [he still] gets an $80,000 a month job after his failure.”

Minute 1:09:00: “The second thing [Joe Biden] was supposed to do was go to Communist China and read them the Riot Act about building those sand-filled airstrips in the South China Sea, essentially aircraft carriers designed to sink our Navy and kill our children and enslave us, he fails. But in his failure…eureka, Hunter gets a $1.5 billion private equity deal with the Communist Chinese.”

Minute 1:43:00: “Some enterprising journalist out there should ask why Ambassador [Geoffrey R.] Pyatt to Ukraine was replaced in the Spring of 2016 by [Marie Louise “Masha“] Yovanovitch…[the] coal miner’s daughter and [he] was sent back to Greece, which was a technical demotion for him in the state department. So just ask him a simple question: Ambassador Pyatt was [Mykola Zlochevsky], the Chairman of Burisma, guilty in your opinion or not? I’m pretty sure his answer is going to be yes. So now you know why they had to replace him.”