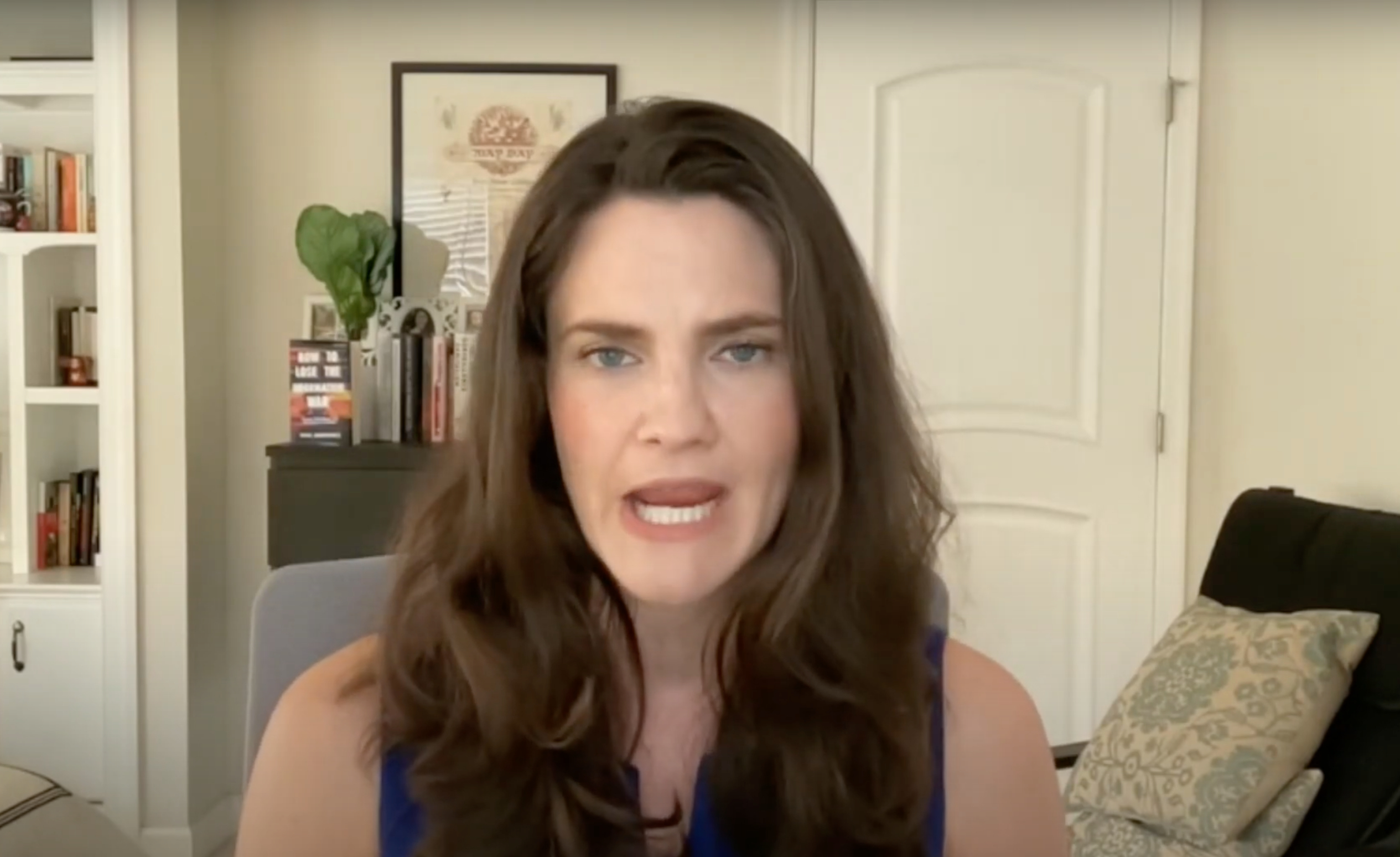 Here’s a look at why Nina Jankowicz, the new executive director of the Department of Homeland Security’s “disinformation governance board,” is an absolute nightmare for America and freedom of speech. Jankowicz, a Fulbright-Clinton Public Policy Fellow, has demonstrated massive political bias, cannot serve as a trusted arbiter of truth, and has even said America needs “law enforcement and our legislatures to do more” to censor the internet.

During recent testimony before the House Appropriations Subcommittee Department of Homeland Security (DHS) Secretary Alejandro Mayorkas announced the establishment of a “disinformation governance board,” specifically aimed at combating supposed Russian interference in American elections. Despite the fact the board itself sounds massively Orwellian its new “executive director” Nina Jankowicz sounds like a downright nightmare for America and freedom of speech.

Although Mayorkas has announced the establishment of the board, the details of the horrid governmental spandrel are not yet fully clear. Mayorkas did highlight during his testimony, however, that the board’s team will “focus [its] efforts on election security,” specifically in regards to Russian “cyber-interference.” (A term used by Rhode Island congressman James Langevin during the testimony.)

If the goal of the new DHS board is to combat “disinformation” regarding Russia, Jankowicz is perhaps the last person on Earth one would expect to have an unbiased opinion. Jankowicz, who is a “disinformation fellow” at the Woodrow Wilson International Center for Scholars and “has advised the Ukrainian government on strategic communications under the auspices of a Fulbright-Clinton Public Policy Fellowship,” appears to be adamant that everything going on between Russia and Ukraine is Russia’s fault. Literally. Everything.

In a January 2022 interview with BBC News (immediately below), Jankowicz highlighted her distaste for Russia, noting the country’s invasion of Ukraine is “Russia’s conflict. Russia has instigated it, Russia has invaded before and annexed illegally the peninsula of Crimea, and now this instigation is being totally controlled by Russia and Russia is the one that has the power to bring it back.”

Jankowicz, who sports the Ukrainian flag alongside her name on Twitter (before the American flag, in order) added that:

“[W]hat we’ve seen is an uptick in rhetoric that NATO and Ukraine are being aggressors; now, that is not gaining much purchase within Russian society, but we’ve seen Russian officials repeat this over and over and we’ve just heard that Jens Stoltenberg say before we began speaking that NATO is a defensive alliance, right? There’s no threat to Russia from NATO being on six percent of the Russian border. And this is a fabricated conflict that Russia is using to try and boost the popularity of the Putin regime at home.”

In an April 1, 2022 video posted by the Foreign Policy Association (immediately below) Jankowicz said that “Russia is extremely practiced at using disinformation on its own people, and I would say, in fact, that is where a lot of the experimentation that Russia has done before it rolls out disinformation campaigns abroad, happens on Russians themselves.” Jankowicz added that “Russian news, the state-sponsored media that exists in Russia is full of disinformation and is all packaged very slickly in sort of an infotainment perspective that makes it engaging, that makes people want to watch it, and people, unfortunately, in Russia do not have a lot of options for independent media. Vladimir Putin shut down many of the independent media outlets or has otherwise fined them or labeled them foreign agents or undesirable foreign organizations… .”

Jankowicz went on to note that the Kremlin—that is, Vladimir Putin’s administration—is prone to spreading “false news… as if it were the gospel truth.” Allowing for “no competing true narrative.”

While it’s clear to anybody who’s capable of even basic reasoning that having a “disinformation governance board” run by somebody with a clear, stated political bias is a bad idea, note the extraordinary, acute hypocrisy of her “false news” as “gospel truth” statement.

On October 22, 2020, Jankowicz wrote in a tweet: “Back on the ‘laptop from hell,’ apparently- Biden notes 50 former natsec officials and 5 former CIA heads that believe the laptop is a Russian influence op. Trump says ‘Russia, Russia, Russia.'” As Jankowicz noted in a follow-up tweet on April 27, 2022, she says she was only live-tweeting the presidential debate between Joe Biden and Donald Trump at the time.

Of course, this is exactly the problem. Jankowicz was “spreading disinformation” with her tweet. She was propagating the idea that 50 former national secretary officials and five former CIA heads believed the laptop to be “a Russian influence op.” However, this was not true. The laptop, as even The New York Times admits now, is real, and really belongs to Hunter Biden, Joe Biden’s drug- and porn-addicted son.

To put a finer point on it: Jankowicz UNEQUIVOCALLY DOES NOT KNOW WHAT IS TRUE. How can she possibly detect for it accurately?

In another Orwellian example of Jankowicz wanting to pull some real 1984 stuff, in a June, 2020 interview she called for people to practice “informational distancing.” In that video (immediately above), Jankowicz encourages people to “[recognize how] disinformation and misinformation often run on emotional manipulation.” She tells people that “when you feel your emotion rising, just walk away from your device for a little bit, let yourself cool down, and then start to consider the source; why does that particular source have an interest in emotionally manipulating you? Is it a credible source? Has that journalist or that author written about this stuff before, do they have the credentials to do so?”

Along with her politicized views on Russia, and its invasion of Ukraine, Jankowicz is also quite “Woke.” In an April 16, 2022 interview with NPR, Jankowicz said that “when my team at the Wilson Center sought to document some of the harassment during the 2020 presidential campaign, over a period of two months on six social media platforms, we found over 336,000 pieces of gendered or sexualized abuse and disinformation directed at just 10 U.S. candidates. And most of that was directed at then-vice presidential candidate Kamala Harris, 78% of it, in fact.” She added that when you “compare what women receive, as some of my colleagues have done in other organizations, with what their male counterparts receive,” Jankowicz added, “it’s just far and away much, much worse, especially if you’re a woman of color or a woman of an intersectional identity.”

Jankowicz added in the interview that:

“I shudder to think about if free speech absolutists were taking over more platforms, what that would look like for the marginalized communities all around the world, which are already shouldering so much of this abuse, disproportionate amounts of this abuse, and retraumatizing themselves as they try to protect themselves from it, you know, reporting, blocking, et cetera. We need the platforms to do more, and we frankly need law enforcement and our legislatures to do more as well. And in other countries that are looking at this, you know, the U.K. has an online safety bill that’s being considered right now where they’re trying to make illegal this currently, quote, ‘awful but lawful content’ that exists online where people are being harassed.”

In the interview, which happened before Elon Musk’s acquisition of Twitter, Jankowicz added she thinks “what we’ve actually been seeing Twitter do in the past couple of months to a year has been pretty progressive on the side of platforms. We’ve seen them introduce what they call human-centered reporting, which looks rather than at their terms of service hierarchy, it asks people what happened in their own words and to report it that way. I think that’s in the right direction.”

Jankowicz added in the NPR interview that “really any enforcement of consequences against abusers would make such a big difference because part of the reason this happens right now is that hardly anything ever happens to the people who are levying the abuse.” She went on to note that “There are no consequences right now because there does not seem to be the political will within companies to crack down on content that drives engagement.”

All of this evidence combined shows that Jankowicz is not politically impartial; in domestic policy or foreign policy. How can this “disinformation fellow” be expected to deliver accurate information about the war in Ukraine when she has such an obvious dislike for Russia? Clearly her political preferences will mitigate her ability to see reality clearly.

On top of Jankowicz’s political bias in regards to Russia, she isn’t even able to recognize that she cannot be the arbiter of truth because she doesn’t always know what’s true. Her presidential debate tweets evince that. If she’s allowed to use “I was just passing on the information” as a cop-out, that means she can never be held responsible if she gets something wrong.

If Nina Jankowicz really wants to “maintain the [DHS’] committment [sic] to protecting free speech, privacy, civil rights, & civil liberties,” as she says in the tweet above, she will do what’s best for the country: step down and delete her Twitter account.