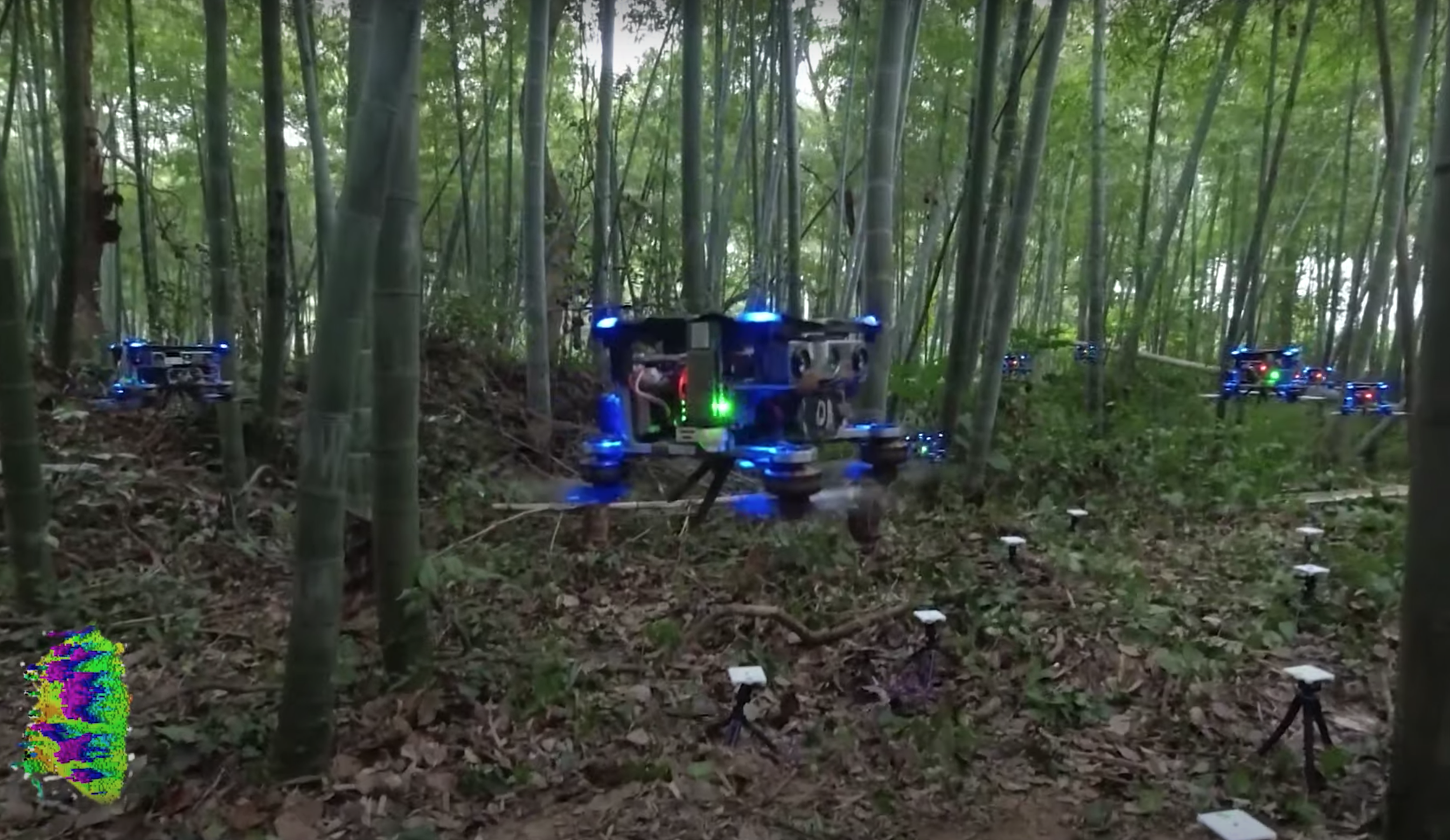 Researchers in China have created autonomous drones that can swarm through forests and use “cooperative tracking” to lock onto, and relentlessly pursue, a target.

In a new study published in the journal Science Robotics, a team of researchers in China led by Xin Zhou, a PhD candidate at Zhejiang University, showcased how they’re now able to program a swarm of 10 palm-sized drones to navigate bamboo forests and other densely packed natural terrain thanks to “advanced trajectory planning” that can be executed without any “external infrastructure”—including GPS.

“In the real world, various aerial swarms have been deployed, including enormous impressive drone light shows presented by Intel, High Great, and CollMot,” Zhou et al. write in their study. “Nevertheless, behind large-scale and successful commercial usages, the swarm positioned by the Global Navigation Satellite System merely follows preprogrammed trajectories and therefore cannot be operated in unforeseen places with obstacles.”

Zhou et al. say they tackled this problem in order to help bring drone-swarm autonomy up to the same level as single-drone autonomous navigation, which is already being “developed aggressively for both industrial and academic practices.” The core issue the authors needed to address to solve drone swarm autonomous navigation “in the wild,” they note, involved four categories of navigation and maneuverability: trajectory optimality, extensibility, economical computing, and miniature size. The four categories together Zhou and his colleagues referred to as “TEEM.”

“Unfortunately, achieving these four aspects together is internally contradictory,” the authors note, adding that “Higher optimality mostly comes from sophisticated modeling and more iterations or trials in the solution space, all of which are achieved at the cost of increased computing time.”

To strike a balance the researchers say they found a way to incorporate “spatial-temporal optimization techniques for trajectory optimality and formulating trajectory planning as a multiobjective optimization under a goal-chasing framework for extensibility.” I.e. Zhou et al. say they looked to birds for inspiration and, in part, developed clever algorithms to program their tendency toward “relatively long-term smooth maneuvers” into the drone swarm.

The result of the authors’ novel trajectory planning is a swarm of drones—each with its own in-depth cameras, altitude sensors, and on-board computer—that can move en masse through areas laden with obstacles in their flight paths. The authors note the drones, which share information about the environment with each other wirelessly, navigate without the need for WiFi, GPS, or any other “external infrastructure.”

In the video at top Zhou and his colleagues show their drones in action as they skillfully maneuver through a bamboo forest; occasionally passing through narrow openings between stalks that are less than 12 inches in width.

In a video embedded in their paper, Zhou and his colleagues note the flight planning for their drones works especially well for “cooperative tracking.” That is, for having the drone swarm identify and follow a “target”—such as an animal or a person. The authors note their drone swarm is also effective for tracking a target because drones with unobstructed views can help to keep those with obstructed ones as “a part of the swarm” as it were.

As for uses? Aside from anything obviously Black Mirror-esque, the authors say that because their drone swarm is highly maneuverable and doesn’t rely on any outside infrastructure, ones just like it could be used for reconnaissance and the like during natural disasters.

“In natural disasters like earthquakes and floods, a swarm of drones can search, guide, and deliver emergency supplies to trapped people,” the authors write. Zhou et al. even speculate the drones could be used for “ready-to-deploy transportation for rovers and drones landing on Mars.”

There are also, of course, endless uses for these drone swarms in the military. In the December 9, 2021 video immediately above, for example, the Defense Advanced Research Projects Agency (or DARPA)—which is, in effect, the research and development arm of the Department of Defense—shows a demonstration of its OFFensive Swarm-Enabled Tactics (or OFFSET).