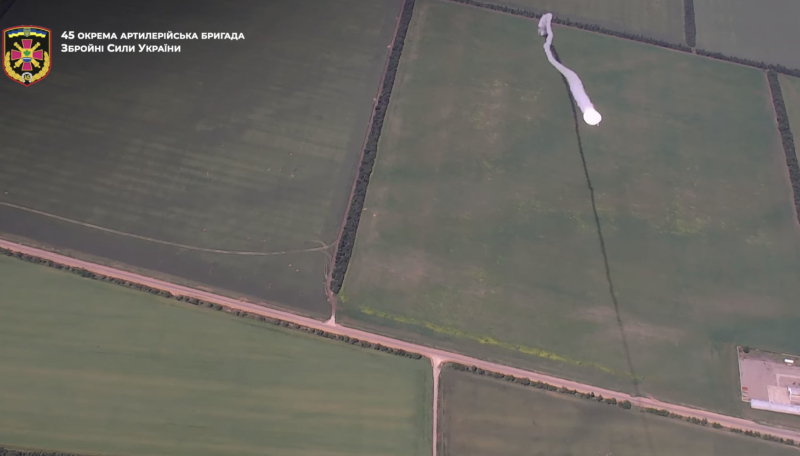 In a new video posted online by the 45th Ukrainian Artillery Brigade, viewers see—from a first-person point of view—a Ukrainian drone blown out of the sky by a Russian missile.

In a new video posted to Facebook by the 45th Ukrainian Artillery Brigade viewers are treated to a first-person glimpse of what it’s like be blown out of the sky by a Russian anti-aircraft missile. The video, which is immediately below, is brief, but shows the exhilarating few seconds it takes for the missile to leave the ground, blast through the air, and send its flying robotic target into the shadow realm.

The photography website PetaPixel picked up on the video, which shows the now-destroyed drone flying over an oil plant in the city of Polohy, which is located in the Zaporozhye region of Ukraine. The WarLeaks Military Blog, an independent, educational and documentary military channel for military enthusiasts from all around the world—which took the video from Facebook and posted it to YouTube—writes that “After directing several artillery rounds on the area the drones [sic] presence was noticed by Russian troops who used a SAM system to knock the unmanned aerial vehicle out of the sky.” (SAM is the acronym for “surface-to-air missile.”)

Alongside the original video on Facebook the 45th Brigade wrote the following (translated, via Google, from the original Ukrainian):

Orcs: we are hot, we will go back – we will group. Find us if you can!
45 oabr and fraternal 43 oabr: challenge accepted.
UAV1: found, corrected.
Garmashi: we will come closer!
UAV1: two shots accurately. Let’s move on to shooting to defeat! I was beaten, I’m falling. Glory to Ukraine!
Garmashi: then we will pour more! FIVE SHOOTS – FIRE !!!
Locals: wow, hit – on fire!
Advanced observation post: detonates all night!
UAV2: the group is cleared! Come on!

Unfortunately, it’s hard to tease apart the exchange; it’s not exactly clear who it’s even between because of the lousy translation—but UAV1 is definitely the drone pilot as he claims “I was beaten, I’m falling. Glory to Ukraine!”

Although there is little other information about this particular video online—aside from people posting many more “glory to Ukraine!” posts in response to it, drones in general have seemingly played a big role in the conflict between Ukraine and Russia so far. Forbes, for example, reported on May 25, 2022 that “Ukraine is knocking increasing numbers of Russian drones out of the sky… removing the eyes… that direct Russia’s artillery.” The Sun also posted a video on June 8, 2022 showing a Ukrainian drone dropping a “grenade” into a trench where Russian troops were gathered.