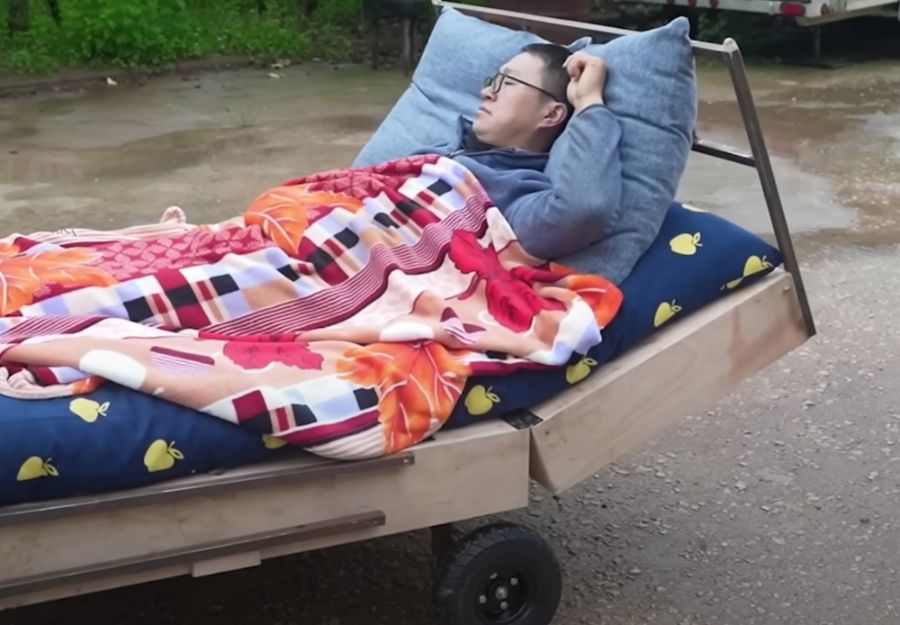 A 39-year-old “DIY enthusiast” in China has created a motorized “bed car” in order to bring a (very lazy) childhood dream into reality.

A 39-year-old man in southwestern China’s Yunnan province, Gu Yupeng, has built a “motorized bed” that’s capable of traveling more than 30 miles. The bed—which also has an adjustable frame and a tent in case it rains—is the physical manifestation of Yupeng’s childhood dream of never leaving his bed. Not because he was sick or anything, though. Just very lazy.

“When I was little, I dreamed of going to school while still lying on my own bed,” Yupeng says in the video above posted by The South China Morning Post. “Because I couldn’t get up early and was always late for school,” the “DIY enthusiast” adds.

In the video we watch as Yupeng spins his bed car and farts around (in the metaphorical sense) his property. The bed, as expected, has four wheels powered by electric motors, along with an onboard battery. Yupeng’s able to steer the bed and give it juice by toggling on a joystick jutting out of the bedside, but well within reach of an incredibly lazy person‘s hand.

The best part of the video, undoubtedly, is when Yupeng takes it to go fishing. “I can go fishing and rest on [the bed],” he notes in the video. He adds that “I think this bed is quite practical. I can use it even when I get older.”

While it’s hard to imagine how lazy Yupeng will be in his old age, his car bed will probably be quite impressive by then. He is, for example, working on a “self-driving” mode for the bed. So nobody better sleep on Yupeng! Not even Elon Musk.