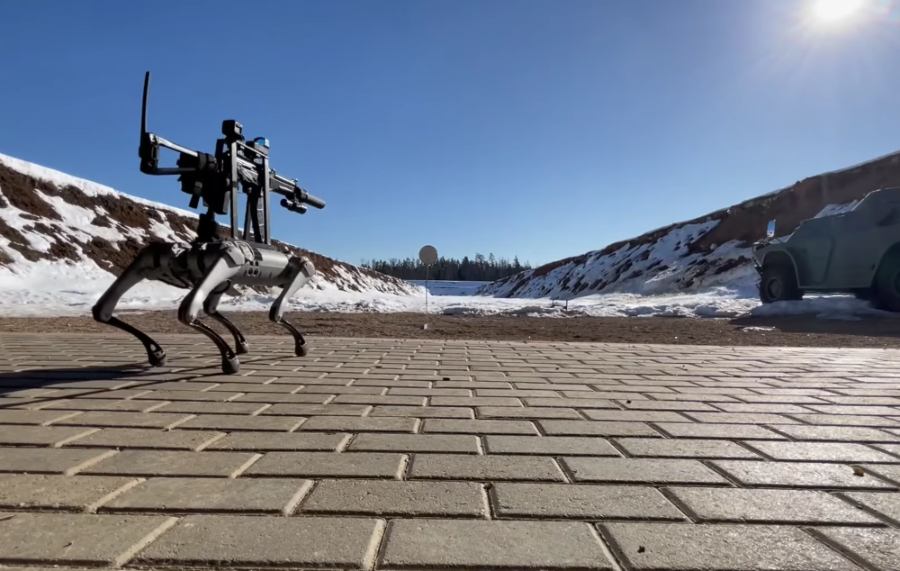 A new viral video shows a Boston Dynamics-like robot dog with a submachine gun mounted on its back firing at targets on a snowy range in what appears to be Russia.

The inevitable has happened: somebody took a robot quadruped—that looks like, and probably is, a knockoff of Boston Dynamics’ infamous Spot—and mounted a submachine gun on its back. The birthplace of the nightmare bot appears to be Russia, which is… to be expected.

Russian inventor and tech entrepreneur Alex Atamanov posted the video of the armed robo-dog above to his personal YouTube channel in March of this year. Atamanov, who’s the inventor of the Hoversurf “hover-bike,” gave essentially no context for the video, only writing in its description: “The guard and patrol robot-dog.”

Regardless of how the armed robot dog came to be, it’s apparently an effective killing machine—even if it can’t quite handle the recoil of the submachine gun on its back. Speaking of which, the gun appears to be a Saiga-9 carbine, a civilian version of the Vityaz-SN submachine gun. Somebody on Atamanov’s channel (perhaps Atamanov himself, it’s hard to tell), fires off a few rounds with the gun in another video on the channel.

In the demo the robot dog’s remote controller (whoever that may be), has the death machine run back and forth a couple of times before firing off its first set of rounds: presumably to warn people that they can run, but can’t hide. Pausing its (very excited) footsteps here and there, the robotic animal of war stills itself before firing off either single rounds, or bursts. Presumably hitting its target at least once before spraying wildly into the air thanks to recoil.

Vice notes the dog-bot carries both a wolf’s head insignia patch, as well as a Russian flag, on its main body. The outlet speculates the insignia appears to be the one “commonly associated with Russian Special Operations Forces or Spetsnaz.” Although, as Vice notes, that doesn’t necessarily mean Russian Special Ops is actually using the armed dog.

Indeed, it’s not only easy to purchase faux special ops insignia online, but knock-off dog bots are apparently not all that expensive. Vice notes the one in this video is likely a UnitreeYusu “technology dog,” which people can purchase from AliExpress for approximately $3,000.

Since it was posted on YouTube in March, the video has gone viral—largely on Twitter, where it’s garnered more than 5.5 million views as of this writing. The reactions from viewers have been, understandably, a bit defensive; with people noting left and right that robot quadrupeds seemed to have been destined to carry guns from their conception.

Twitter use @Shattubatu, for example, wrote an ironic tweet that summed things up nicely in regards to sentiment (and likely, reality): “‘They’re going to be used for search and rescue to find people in rubble!’ – Multi-billion dollar defense contractor.” Making things even more interesting (or perhaps just plain worse), is the fact that engineers at MIT are rapidly improving robo-dogs’ abilities to navigate their terrain using advanced AI.