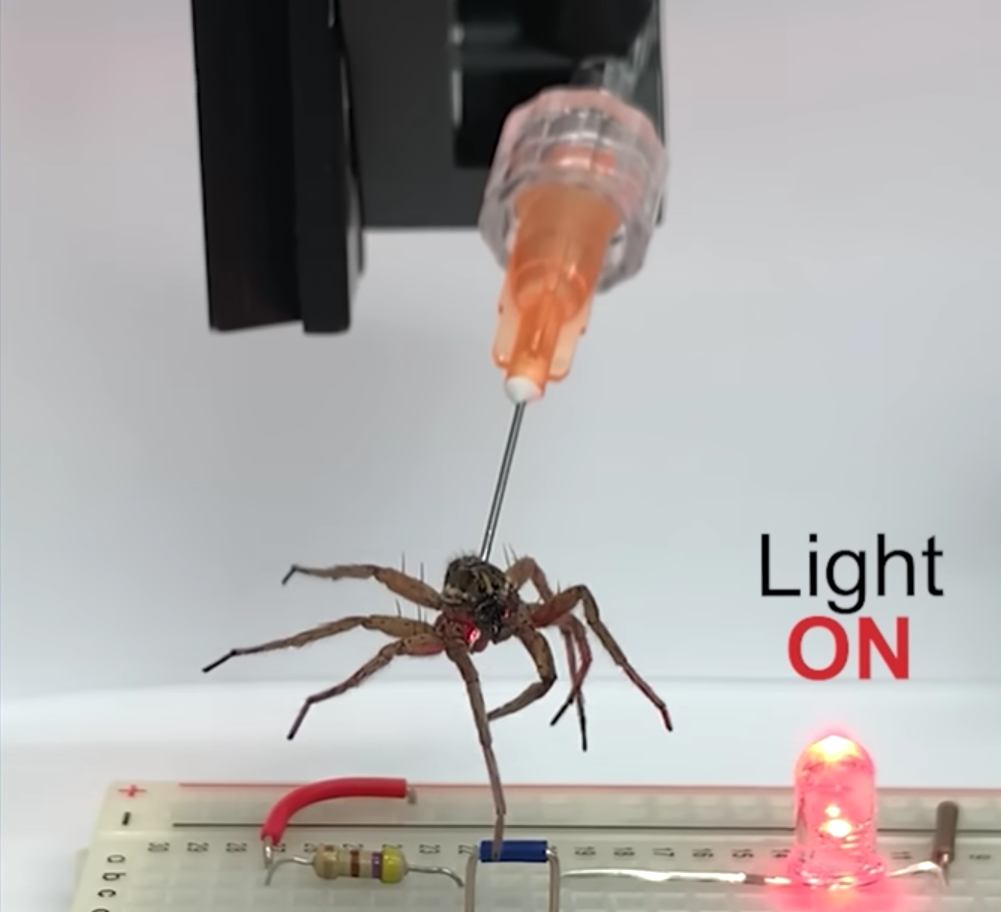 A team of researchers at Rice University in Houston has created “necrobotic” small-scale, soft grippers by pumping air into a dead spider’s appendages via a syringe stabbed into the arachnid’s body.

A team of researchers at Rice University in Houston has created soft grippers for small-scale, lightweight objects out of a novel, organic material: a spider corpse. The researchers, who outlined their dead-spider grippers—or “necrobotic” grippers—in a study published in Advanced Science, say dead spiders—in effect—are intrinsically suitable for this use because movement of their legs relies on the pumping of hydraulic fluid; something that’s easy to emulate with an ex vivo syringe and compressed air after they die.

“Designs perfected through evolution have informed bioinspired animal-like robots that mimic the locomotion of cheetahs and the compliance of jellyfish [and] biohybrid robots go a step further by incorporating living materials directly into engineered systems,” the researchers write in their study. They note in this instance an inanimate spider is repurposed as “a ready-to-use actuator requiring only a single facile fabrication step.”

As the video above shows a spider, unlike mammals that flex and extend their appendages by synchronizing opposing muscles, uses hydraulic pressure that it generates inside of the main cavity of its body. When a chamber near a spider’s head contracts, it sends blood to the arachnid’s legs, forcing them to open outward. When the chamber is relaxed and the blood withdrawn, the spider’s legs retract and close inward.

This is the reason dead spiders are almost always found in the “closed” position. There is simply no hydraulic pressure keeping blood in their legs, so their appendages naturally curl in toward each other. In fact, the researchers were inspired to do this work by a dead spider they found in their workplace in that exact curled-up position.

“We were moving stuff around in the lab and we noticed a curled up spider at the edge of the hallway,” lead author Faye Yap said in a Rice press release. “We were really curious as to why spiders curl up after they die,” the PhD Candidate in Mechanical Engineering added.

After performing an internet search for enlightenment, Yap says she and her colleagues learned about the arachnids’ hydraulic limbs and “wanted to find a way to leverage this mechanism” as a tool.

To create the necrobotic gripper, Yap, Director of Rice’s Preston Innovation Lab Daniel Preston, and others began by euthanizing a wolf spider (belonging to the family Lycosidae) by freezing it to death. The researchers then stabbed a 25-gauge hypodermic needle into the spider’s prosoma (its internal hydraulic chamber) and sealed the new opening with glue.

Once the researchers had stuck the needle into the spider’s prosoma, they were then able to pump air into the spider’s legs, causing them to open. To close them, of course, all they needed to do was depressurize the air by pulling back on the syringe.

“The dead spider isn’t controlling [the hydraulic] valves” in its body, Preston said in Rice’s press release. “They’re all open. That worked out in our favor in this study, because it allowed us to control all the legs at the same time.”

The result is a soft set of grippers able to firmly grasp and lift objects up to 130% the spider’s own body mass; a small amount of weight in relative terms, but sufficient for “micro manipulation,” which includes things like assembly of microelectronic devices. Yap added in Rice’s press release that “Another application could be deploying [the necrorobot] to capture smaller insects in nature, because it’s inherently camouflaged.”

And while it’s not clear why, exactly, necrobotic spiders would need to be deployed to take out insects, there are some very creepy small-scale robots that need something to keep them in check. (Although something to keep undead robot spiders in check would probably be good too.)