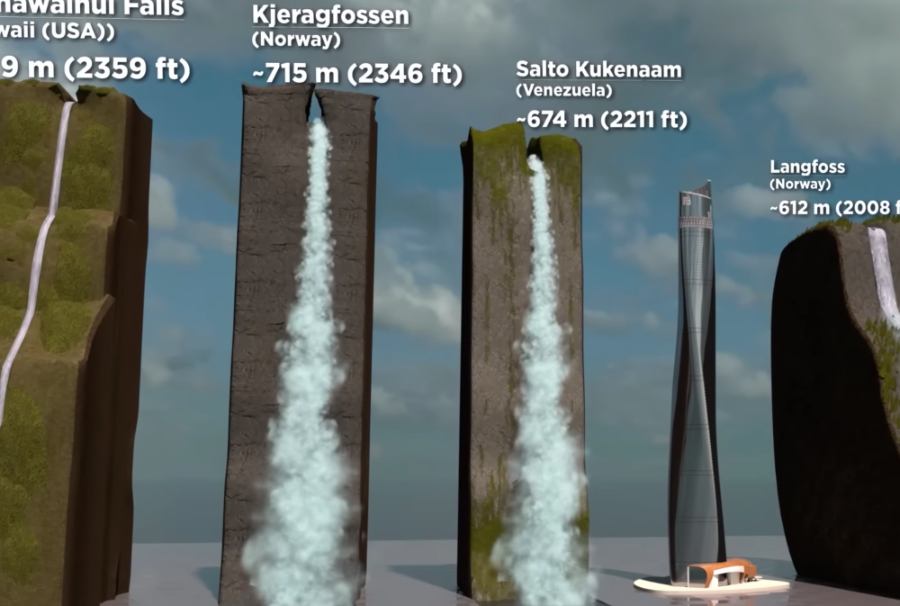 This Video Compares the Sizes of the World’s Tallest Waterfalls

In a new video Spanish animator MetaBallStudios compares the world’s tallest waterfalls, and Niagara Falls is the shrimp of the the lineup.

MetaBallStudios (MBS), a Spanish animator with a knack for comparing things in mind-blowing ways, is out with a new video. In his latest comparison MBS (a.k.a. Alvaro Gracia Montoya) compares a series of the tallest waterfalls in the world. And Niagara Falls is just where the lineup begins.

In MBS’ video (above) he kicks things off by noting the parameters for the comparison. Wider waterfalls, MBS notes, are only represented by a small section of their total width. In the case of waterfalls with multiple drops, the animator chose to measure the larger of the two drops, but not the two drops combined.

The lineup itself begins with Hafragilsfoss in Iceland, which is is a mere 70 feet tall. The comparison quickly reaches grander heights, however, with Niagara Falls at 167 feet high, Victoria Falls in Zambia (355 feet high), and Sutherland Falls in New Zealand, which, at 813 feet high, is nearly as tall as the Eiffel Tower.

Things take a turn for the vertigo, however, when goliath vertical streams like Cerberus Falls in Canada enter the picture. Cerberus, as MBS illustrates so well, is gargantuan at 1,558 feet tall—seemingly as tall as World Trade Center One without its spire. From there, things get downright preposterous, with Longfoss in Norway at 2,008 feet high, and Manawainiu Falls in Hawaii at 2,359 feet high.

As for the tallest waterfall in the comparison? That award goes to Angel Falls in Venezuela, which is an eye-popping 2,648 feet tall. Or about the same height an astronaut could leap off of Mars’ moon Phobos. Which is a comparison that’s easy to make as MBS has also made a comparison video of how high somebody could jump on all the planets (and some moons) in the solar system.