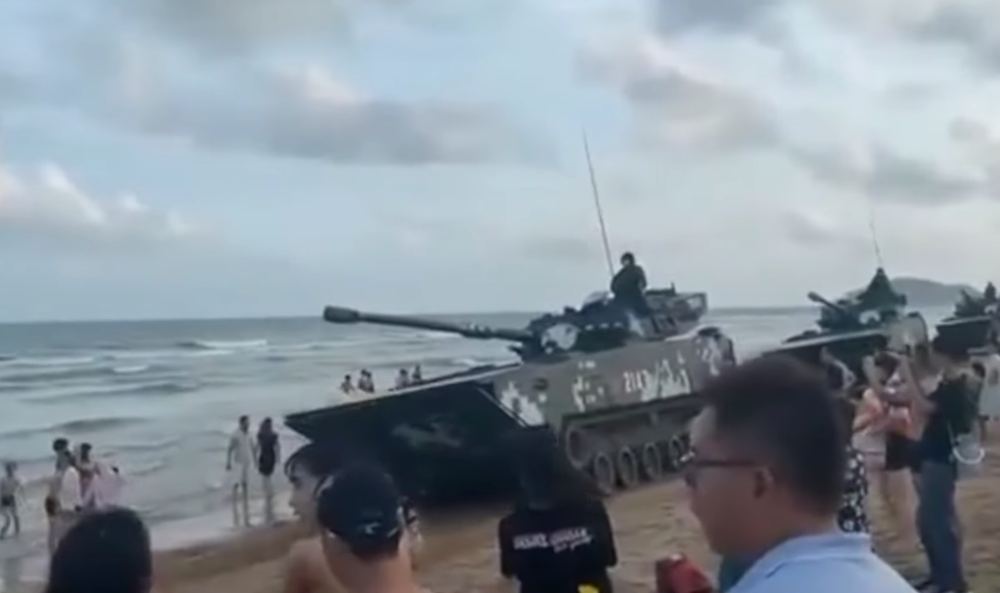 Here Are Glimpses of China’s Live-Fire Drills on the Coast of the Taiwan Strait [Updated August 5, 2022]

Here are a handful of videos offering glimpses of China’s recent live-fire military exercises on the coast of the Taiwan strait amidst rising tensions with the U.S. [Updated August 5, 2022]

The videos below offer glimpses of China’s recent live-fire drills, which include PLA (People’s Liberation Army) soldiers firing off rounds from ground-based artillery, shoulder-mounted rocket launchers, and amphibious tanks cruising through the ocean. All of which, apparently, are a lead-up to more live-fire exercises China will be conducting between August 4 and August 7 within Taiwan’s own “Air Defense Identification Zone” (ADIZ).

In the video immediately below, posted by the “non state-affiliated media” outlet Terror Alarm, we see a barrage of live shells fired into the night sky over the Taiwan Strait. Terror Alarm notes that, simultaneously, Taiwan had deployed air defense systems to Taoyuan International Airport, which is a civilian facility. (It seems Terror Alarm’s claim about Taoyuan is hard to corroborate, although The Daily Tribune did report that 51 flights have been cancelled ahead of China’s imminent live-fire drills.)

In another tweet China’s Assistant Minister of Foreign Affairs Hua Chunying posted a clip from a China Global Television Network (CGTN) report showing PLA live-fire military drills in the Taiwan Strait “completed with expected results.” Meaning, according to PLA Eastern Theater Command Jin Zong‘s opinion offered in the CGTN video, that “the combat capability of the army under actual combat conditions” was tested and approved. Zong adds in the video that the military “will resolutely follow the Communist Party’s instructions.”

Insider Piper tweeted out a video on August 4 noting that the PLA was conducting “long-range live-fire drills targeting designated areas on the eastern part of the Taiwan Strait after Pelosi visit[.]” Watch the clip with sound on.

In The South China Morning Post‘s own video report on YouTube, the news outlet shows a lengthy line of amphibious tanks on a beach in China. Onlookers, including children, watch as the line of tanks rumbles by on the sand.

The same video shows the amphibious tanks arriving in Xiamen, long rows of troop-carrier trucks, Chinese jets taking off from runways, and a deployed aircraft carrier, amongst other displays of military strength.

The below video from CGTN shows PLA soldiers carrying out “maritime real-combat trainings” in the Yellow Sea and East China Sea, which are both north of Taiwan.

In the video below posted to Twitter user Voice of East, Chinese civilians watch as troops and armored vehicles move into East Fujian. (Note: Voice of East is a small account and while this video has been making the rounds on the internet it appears no official news source has corroborated it.)

Sky News shows a video from a “Chinese Military Handout” in the tweet below. In the video, China shows live-fire exercises being conducted 80 miles from Taiwan’s border.

Along with China, Taiwan has also, apparently, started performing live-fire exercises with its military. In the RUPTLY video immediately below we see Taiwanese soldiers and amphibious tanks making a landing on what is—presumably—the country’s own beaches. Artillery rounds also explode in the air miles off the coast.