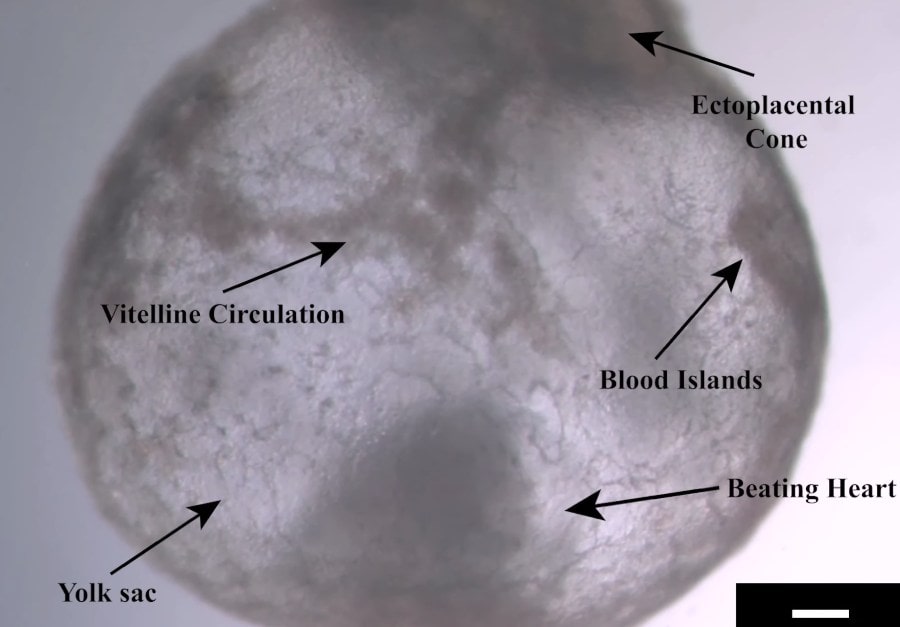 Researchers at the Weizmann Institute of Science in Israel have created “whole synthetic mouse embryos” beginning the process solely with pluripotent stem cells.

In a new study published in the journal Cell a team of researchers from the Weizmann Institute of Science in Israel outline how they were able to develop “whole synthetic mouse embryos” beginning the process solely with pluripotent stem cells. While the embryos did indeed begin to grow and differentiate into early stage mice—with early brain, heart, and blood cells, as well as the beginnings of a digestive system and eyes—the researchers were unable to develop ones that lasted for more than 8.5 days. The team has still started a company based on the tech, however, which aims to use synthetic human “embryoids” in order “to make humanity younger and healthier… .”

In their study, the researchers, led by Jacob (Yaqub) Hanna of the Department of Molecular Genetics at the public research university, generated their synthetic mouse embryos solely by amassing naïve (i.e. yet to be differentiated into a given cell type) embryonic stem cells; specifically ones that overexpressed the transcription factors that modulate nascent, differentiating cells, as well as the “primitive endoderms” of the embryos. (The primitive endoderm, or PrE, is the innermost of the three primary germ layers in the very early embryo. Transcription factors are the proteins that control the rate of transcription of genetic information from DNA to messenger RNA.)

The researchers then took these manipulated embryonic stem cells and placed them in “electronically controlled” ex utero (or outside the uterus) embryo cultures. While in the cultures, the embryonic cells were supplied with the conditions necessary for growing a natural embryo; including a continuous flow of oxygenating gas and an optimal presence of carbon dioxide. The electronically controlled cultures also automatically controlled ambient surrounding gas pressure and other environmental factors. (The stem cells in the embryo cultures were also later subjected to several other modifications—including treatment with a water-based salt solution.)

In the video immediately above we see one of the synthetic mouse embryos on day 8 of its development. The Weizmann Institute notes in the video’s description that the mouse embryo has a beating heart and emerging circulatory system. The video labels these different murine organs and systems as well, clearly pointing out the early stage beating heart and the pulsating blood vessels.

In a report from Haaretz the researchers explained their naïve embryonic stem cells were even able to produce their own yolk sac and placenta. “That was… [a] major surprise,” Hanna told the Israeli news outlet. He added that it turns out “The earliest stem cells can also manufacture the surrounding tissues, and later all of the [mouse’s] organs.”

Hanna went on to say that prior to this research scientists hadn’t been able to recreate cellular differentiation with an embryo because there were too many specific stages and timing issues. But with this experiment they’ve been able to pull off the feat “because if you put the naïve stem cells in a supportive environment they will self-organize and start to produce all the organs and tissues.”

Hanna et al. believe this process is a “sophisticated mechanism for manufacturing organs,” in effect making the synthetic embryos “the best 3D biological printer there is.” Indeed, the researchers believe this best-ever “3D biological printer” could help with things like reducing the use of animals in scientific experiments by replacing them with the embryo models. Hanna also says the embryos could be used as “as a platform for testing drugs.”

The researchers’ embryonic models still have major limitations, however. As Haaretz noted, the team’s synthetic embryos were defective compared to naturally grown embryos. “Out of 10,000 starting cellular aggregates, only about 50 ultimately self-organized into embryos after eight days,” the Israel news outlet noted, adding that “The synthetic ones also only survived eight and a half days.” Haaretz notes the full gestational period for a mouse is 20 days.

Despite the limitation, the researchers believe the cells produced by the embryos could be used for the creation of tissues that could be used in transplants. “In mice we’ve shown [these transplants are] possible, [but] now we need to see it in humans.”

To that end, the researchers have started a biotech company dubbed RenewalBio. According to the company’s website, its aim is to solve “complex and compounding issues” surrounding “fast-aging populations“ as well as “a wide variety of human ailments including infertility, genetic diseases, and longevity.”

“It is important to notice that these synthetic embryos do not progress very far and have defects and the same should be expected from any human counterpart,” Hanna cautioned in Haaretz’ report perhaps tempering excitement over the business’ goals. “[A]n important issue raised by the potential of this study is the need to think about the ethical issues that it raises in the human experimental context,” the scientist added.