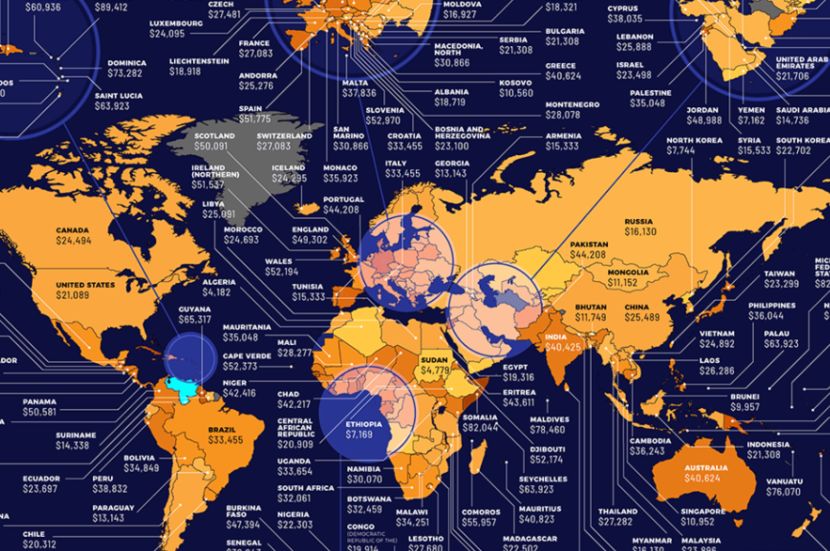 Here’s How Much It Costs to Mine Bitcoin, Dogecoin, and Ethereum in Different Countries/States

Mining experts working for “911metallurgist” have determined how much it costs (in dollars) to mine Bitcoin, Dogecoin, and Ethereum in countries and states around the world and, additionally, organized the data into handy infographics.

In a new series of detailed infographics mining experts working for mineral processing engineer “911metallurgist” estimate how much it costs to mine three of the top cryptocurrency coins—including Bitcoin, Ethereum, and Dogecoin—in different countries and states around the world. And while the figures may not be surprising to most crypto enthusiasts, it does highlight just how drastic the discrepancy is between cost-to-mine in different parts of the globe.

The inspiration for assembling the “cost of mining crypto” infographics stems from the People’s Bank of China officially banning all cryptocurrency mining back in June of 2021; joining eight other countries already condemning crypto including Egypt, Iraq, Qatar, Oman, Morocco, Algeria, Tunisia, and Bangladesh. “Since the ban, crypto players have spread around the globe looking for new places to set up mining operations,” 911metallurgist reports. To that end, the engineer and his mining experts set out to find “the cheapest and most expensive countries for mining cryptocurrency.”

“Since [China’s] ban, crypto players have spread around the globe looking for new places to set up mining operations. Many fled to neighboring Kazakhstan – which has the 10th least expensive electricity of any country – causing the global share of all Bitcoins mined in the country to rise from 8.8% in May 2021 to 18.1% in July 2021,” 911metallurgist reports. “Many also fled to Texas, where abundant natural gas and a deregulated power grid provide some of the cheapest electricity in the world.”

To determine which countries provide the cheapest electricity, and therefore the cheapest mining costs for a given cryptocurrency, the 911metallurgist team used data on the cost of electricity per kilowatt-hour from the World Bank, Cable.co.uk, and the U.S. Energy Information Administration. The mining experts also included data on the number of days and wattage required to mine each coin with a mid-range miner for each cryptocurrency from Coinwarz (a website that helps people figure out how profitable various coins are for trading and mining).

As for the results? It turns out Kuwait is the cheapest country in which to mine cryptocurrencies; followed by Algeria, Sudan, Yemen, Kyrgyzstan, Ethiopa, Qatar, Angola, North Korea, and Kazakstan. In Kuwait, for example, it costs $1,393.95 to mine one bitcoin; $5.87 to mine one Ethereum coin; and just a single cent to mine one Dogecoin.

On the other end of the cost spectrum, the mining experts found that the top 10 most expensive mining countries are, in order: Venezuela, Solomon Islands, Antigua and Barbuda, Micronesia, Kiribati, Somalia, Marshall Islands, Maldives, Liberia, and Cuba. In Venezuela, it would cost a miner an astounding $246,530.74 to mine a single bitcoin; $1,038.50 for an Ethereum coin; and $1.36 to mine a Dogecoin coin.

Obviously mining in the most expensive countries makes absolutely no sense at this point in time. As of this writing, a single bitcoin is worth approximately $23,000; a single Ethereum coin, $1,700; and a single Dogecoin, $.07.

In the U.S., the mining experts note “The cost of mining Bitcoin varies heavily… causing certain states with cheap electricity – Texas, Oklahoma, and Kentucky – to emerge as major crypto hubs.” The experts note that Georgia has emerged as “the primary hub for crypto mining” in America, despite having a mining cost that’s roughly in line with the national average.

As for why there are such stark differences in the costs of electricity that is because, of course, different countries (and states in the U.S.) have different types and amounts of energy resources. The mining experts note that “Kuwait, for example, has an estimated 101.5 billion barrels of oil reserves, the fourth most of any country. As a result, the cost of mining one Dogecoin in the Middle Eastern country is less than one penny, the least of any country worldwide.” Conversely, “Many of the most expensive countries for mining crypto are small, isolated countries with no natural resources and are unlikely to attract any crypto entrepreneurs.” Unfortunately, that fact probably doesn’t help the other political issues that small-island nations constantly face.