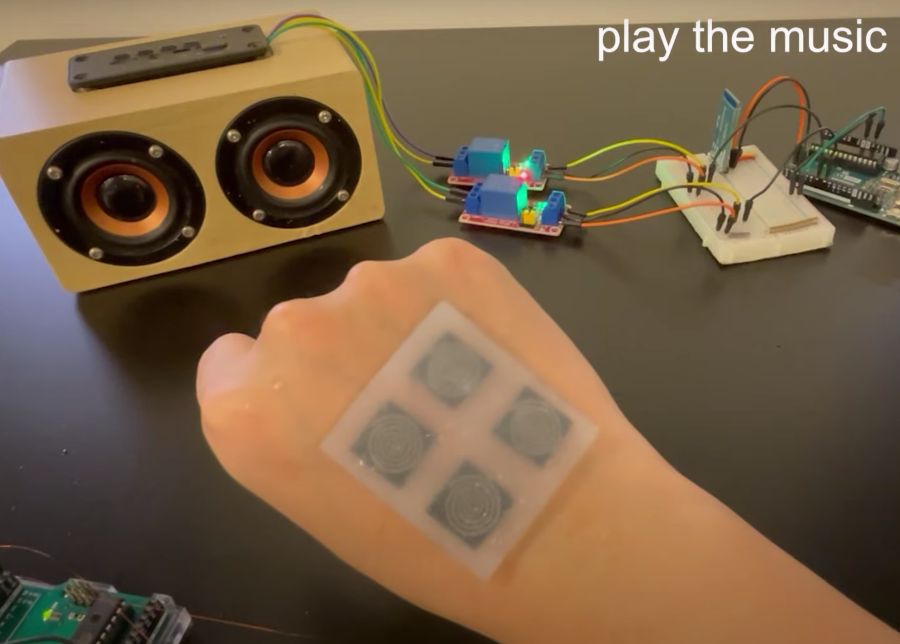 A team of researchers at UCLA has created a waterproof human-machine interface (HMI) that turns one’s body movements into electrical signals that can be used to remotely control electronics via Bluetooth signals.

A team of researchers at the University of Massachusetts Amherst recently announced that it had created a “clean energy harvesting device” (made with nanoscale biofilms produced by gene-edited bacteria) that’s able to power so-called “wearable” electronics. Now, another team of researchers at UCLA has a proof-of-concept for its own device that uses the body’s natural energy to power electronic devices: a waterproof human-machine interface (HMI) that turns one’s body movements into electrical signals that can be used to remotely control electronics via Bluetooth signals.

The researchers outlined their novel, waterproof HMI in a study published in Applied Physics Reviews. Interestingly, the researchers note in their abstract that “Skin-integrated electronics that directly interact with machines are transforming our ways of life toward the emerging trend of the metaverse,” and that their device stands as a step toward “a wearable and skin-conformal interface that simultaneously features waterproofness, low cost, and low power consumption for human–machine interaction.”

As for how the device works, in essence, it’s worn on the back of the hand and uses “magnetoelastic sensors” to convert “biomechanical activities” (i.e. movement of the body) into electrical signals. When a user presses down on one of the magnetoelastic sensors they deform the array of “nanomagnets” that make up the sensor; in turn, varying the electromagnetic fields they produce. The change in electromagnetic field, in turn, affects an analog circuit in the device that produces an amplified, filtered signal. The signal is then processed by a microcontroller—that is, a very small computer—and sent as a wireless signal from a “Bluetooth module” in the device to another, receiving-end Bluetooth module; one that’s connected to an electronic device, such as a stereo.

The result of the design is a relatively thin, flexible patch consisting of a porous silicone rubber matrix—housing all of the aforementioned nanomagnets and electronic components—that, in effect, works as a remote control. In the video immediately above we see a user demonstrate the HMI’s capabilities—using it to wirelessly play, pause, and change the music tracks coming from a stereo.

“Owing to the material’s flexibility and durability, the magnetoelastic sensor array can generate stable power under deformations, such as rolling, folding, and stretching,” study author Jun Chen, from UCLA, told news outlet Tech Xplore. “Due to these compelling features, the device can be adopted for human-body powered HMI by transforming human biomechanical activities into electrical signals.”

As for why it’s so important the device be waterproof? That’s because human skin tends to get moist, and, of course, wet when sweating. As the researchers at UMass Amherst showed, however, sweat—like bodily movements—can be converted into electrical energy. Something that the Department of Defense (DOD)—which helped to fund this HMI research—is probably already very interested in.