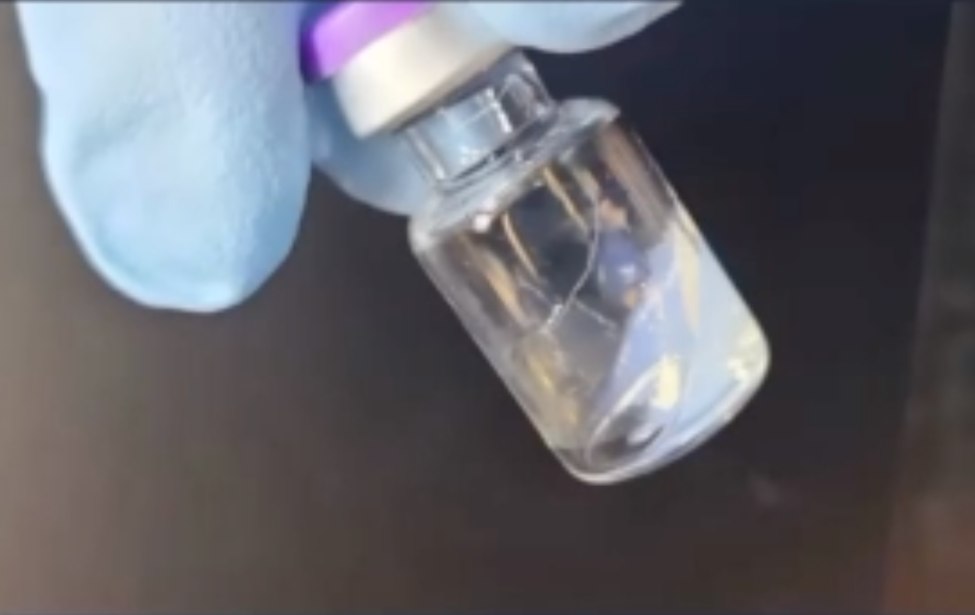 In this interview with Pure Media Australia, Melissa McAtee—who went viral online for exposing the use of aborted fetal stem cells in the development of Pfizer’s COVID “vaccine”—claims that the pharma giant’s novel injections glowed blue when she was inspecting them. McAtee also says she believes that Pfizer’s COVID injections contain luciferase, graphene oxide, nanotechnology, and parasites.

In a new interview with Pure Media Australia—which aims to “bring back sanity” and provide conversations with the world’s “most banned speakers”—former Pfizer employee Melissa McAtee describes why she’s come out as a whistleblower. And while some may already be familiar with McAtee thanks to her 2021 interview with Project Veritas—in which she made clear that human fetal stem cells were used in the development of Pfizer’s COVID injections—in this one, the whistleblower reveals her belief that Pfizer’s COVID “vaccine” vials likely contain luciferase, parasites, nanotechnology, and graphene oxide. McAtee also says—and shows—that, under the right light, Pfizer’s “vaccines” glow with an eerie blue light.

“My first day dealing with it, I noticed it glowed. Right away,” McAtee tells the Pure Media Australia hosts, referring to the mRNA COVID injections developed by the pharma giant. “And I didn’t like that considering one of the quote-unquote conspiracy theories was that luciferase was in it, which is a bioluminescence compound that causes a glow,” McAtee adds.

McAtee, who worked as a Manufacturing Quality Auditor (MQA) for Pfizer prior to coming out as a whistleblower, claims that luciferase—a light-producing enzyme that’s found in certain luminous marine and terrestrial microorganisms (e.g. fireflies)—is responsible for the blue glow of the Pfizer COVID vaccines. “It’s usually used in testing of products such as vaccines to where they can track… within the cells within the body,” McAtee says. “However [Pfizer claimed that it] wasn’t in there. And so my question to Pfizer was: ‘OK, well, if it’s not luciferase causing the glow, and it’s not graphene oxide… what is it?”

Later in the interview, McAtee says that she “found one [type of luciferase] that’s called dinoflagellate,” and claims that “something’s that come out with the Pfizer patent of the vaccine is that it turns your double helix DNA into a triple helix.” McAtee, unfortunately, doesn’t appear to provide source evidence for this claim, but after a cursory online search, it’s possible to find the term “RNAs that induce triple helix formation” in patents from Moderna that are potentially unrelated, or related, to the COVID injections; it’s hard to say for sure.

Some variation of the above excerpt was found in several of Moderna’s patents, and the wording does indeed match that of dinoflagellate luciferase; i.e. dinoflagellate luciferase does have “regulatory three helix bundles” as a part of its protein structure. (A helix bundle is a small, particular type of protein fold.) However, there is no stated link (again, after a cursory glance) between dinoflagellate luciferase and the Pfizer COVID “vaccine.” Fact checkers—perhaps rightly, perhaps not—also point out that just because Pfizer mRNA injections can “induce” these triple helix formations, that doesn’t mean they necessarily do so in the human body.

“If you actually read [Moderna’s] patent, it has nothing to do with forming a triple helix of the RNA therapeutic with the host DNA,” Dr. Daniel Kuritzkes, chief of infectious diseases at Brigham and Women’s Hospital, told the AP. “The messenger RNA from the vaccine does not form a triple helix, and it certainly doesn’t intercalate with the DNA to form a triple helix in any way,” Kuritzkes added.

Regardless of whether or not Pfizer’s (or Moderna’s) COVID injections are indeed altering people’s DNA to form these foreign folds, McAtee says that “All the product I’ve dealt with, anywhere on the planet, people have been [at Pfizer for] 50 years, [and] never [seen] anything that looks like this. Nothing.” The former MQA adds that the “vaccine” in a Pfizer vial “goes from this clear, kind of very, very faint yellow to glowing a blue glow” depending on its background. She adds that “this product also moves more like mercury than water. Like it’s kind of thick, but it moves in kind of a weird way; it doesn’t fully separate.”

McAtee also notes the Pfizer injections likely have graphene oxide in them. She notes specifically that Pfizer has apparently left the door open to the material—the oxidized form of graphene, which itself is a one-atom-thick layer of carbon atoms arranged in a hexagonal lattice—being present in its COVID injections. She highlights one set of emails, in which higher-ups at Pfizer debate the language around whether or not graphene oxide is present in the injections. (Apparently all of these emails were saved to a database used for PR-related content, which McAtee had access to when she was still a Pfizer employee.)

In one email chain between “a woman named Sandra” and “a guy named Steve” (who McAtee speculates is “higher up in the company…”) the former Pfizer employee asks the latter:

“I just wanted to check if the below statement is acceptable regarding graphene oxide… . ‘[G]raphene oxide is not used during the manufacturing of the vaccine and the final product does not contain graphene oxide. We cannot guarantee that minute amounts of substances are not contained in raw materials obtained from our suppliers. To ensure we have a consistent and reliable supply of medications we must use a network of suppliers and manufacturers globally for both active and inactive ingredients.'”

In response, McAtee shows, Steve said: “It would obviously be preferred to not add that second sentence that we ‘cannot guarantee,’ but it is our common disclaimer to protect against any ingredients that may be in raw materials, that we do not confirm against in any way. If we have the ability to specifically omit it, we should, but it would likely require some extensive confirmation from GCNC. But I think this is the statement we should go with for now. Hopefully our customers would appropriately consider the disclaimer in the right way.”

McAtee translates, and says that Steve told Sandra “basically… leave [the part about not being able to guarantee the absence of graphene dioxide] out. And he says, just say the first sentence; that graphene dioxide is not used in the manufacturing, the final product does not contain graphene oxide.” McAtee notes that “technically, [Pfizer] can’t guarantee [there are] things that can’t be [in the COVID injection].”

While McAtee doesn’t seem to have any concrete evidence there is graphene oxide in Pfizer’s COVID injections, that has been established over and over by scientists who’ve reportedly looked at the injection material using, for example, direct energy spectroscopy, as microbiologist and nutritionist Robert O. Young did. Lab scientist Poormina Wagh says she and her colleagues have also found reduced graphene oxide in the thousands of vials they’ve tested. (See more via the embedded posts above.)

The former Pfizer MQA also says she thinks that the “fibrous clots” that have been discovered in the dead bodies of those who’d been “vaccinated” against COVID by the likes of veteran embalmer Anna Foster and funeral director John O’Looney “could be from… graphene oxide, or could just be a bad reaction to the vaccines that have this kind of technology in them.” (For more details on the clots, click on the embedded article immediately below.)

Along with the potential presence of luciferase, and graphene oxide, McAtee also says she believes Pfizer’s COVID injections employ CRISPR and nanotechnology. The former big pharma employee highlights a page on the NIH, which says that the Nanotechnology Characterization Lab (NCL), established in 2004 as an inter-agency collaboration among NCI, NIST, and FDA, is “temporarily open to COVID applications.”

Indeed, while a cursory internet search doesn’t turn up the exact page from which McAtee reads, there is an NIH page that says the following: “Considering the relevance of nanoparticles to combat COVID-19 pandemic, the NCL also supports the characterization of nanotechnology-based COVID vaccines and therapeutics.” McAtee says, however, she can’t be certain, but developers of the COVID injections must “have at the very least been using nanotech for the COVID research.”

As for the CRISPR claim, it seems like that is relatively baseless, although McAtee notes that the mRNA injections “must” enter the nucleus of the cell. While it doesn’t seem that has been fully confirmed, a peer-reviewed study in the journal Current Issues in Molecular Biology provided evidence that Pfizer’s “vaccine,” does indeed see its mRNA reverse-transcribed into DNA in human cells. (The study’s authors note they are not sure if the mRNA is transcribed into people’s genomes.)

“I will say that I personally think that there are parasites in the vaccine. Now what I can’t prove [is] that there are and I can’t prove that it’s intentional… “ McAtee says. “And I will say Ivermectin is an anti-parasitic and it worked against COVID.” McAtee draws a parallel between the mechanisms of action between COVID-19 and the “vaccines,” hence the reason why she thinks Ivermectin working on the former “bioweapon” means there are parasites in the latter “bioweapon.” (Also note that Robert O. young also says that he found lots of parasites in the COVID “vaccine” vial contents when he studied them.)

Finally, toward the close of the interview, McAtee elaborates more on what she described in her viral interview with news organization Project Veritas from October of 2021. She brings up on screen “the fetal cell line emails” between Pfizer employees, which outline the best response to the question ‘Are fetal stem cells used in the development process for the COVID injections?’ One employee writes:

“HEK293T cells used [to make Pfizer’s COVID injection]… are ultimately derived from an aborted fetus. On the other hand the Vatican doctoral committee has confirmed that they consider it acceptable for pro-lifers to be immunized. Pfizer’s official statement couches the answer well and is what should be provided to an outside inquiry.”

“So right here they are acknowledging that they know what they could say goes against what the Vatican has already said,” McAtee notes. She goes on to highlight the fact that “HEK293T” stands for “human embryonic kidney experiment 293” and the “T” “literally means cancerous.”

Throughout the interview McAtee describes many other strange manufacturing methods practiced by Pfizer—even including abnormal placement of labels on the “vaccine” vials in order to hide the blue glow of their contents. What else the pharma giant may be hiding—along with possible bits of graphene oxide, nanotechnology, parasites, and luciferase—is still anybody’s guess.